If you are a regular reader of Our House in Provence blog, you know that I am a "foodie". I love to eat, cook, read and talk about food and restaurants. I guess that's how we ended up as co-owners of a small French bistro in Northern California called Bistro Des Copains.

I used to subscribe to almost every cooking magazine there is but I don't do that anymore except for "Saveur" and "Cook's Illustrated". In my opinion, in an effort to compete with all of the cooking shows and channels that populate daily TV, the magazines have been redesigned and content dummed down to keep their readers.

While I don't read food magazines like I used to, I love cookbooks and continue to get new ones about foods I like to eat and cook. In the dining room adjacent to our Northern California kitchen, I have two tall bookcases full of cookbooks. At last count, I had over 250 of them. 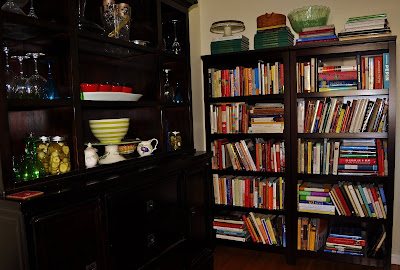 My family loves when I cook but I don't have time except for weekends and then cook only if Shirley is not working at the hospital. Although I have all these cookbooks, you probably aren't surprised that I usually do the same salads and cook the same pastas, risotto, and fish over and over.

A few weeks ago on a Saturday before Christmas, we were eating lunch and we started talking about my cookbook library and that I had requested, as usual, cookbooks for Christmas. Shirley suggested that my New Year's resolution should be to cook a new recipe out of a different cookbook every week. So 52 new recipes from 52 cookbooks during 2013.

Because I like a challenge and want to try new recipes, I have accepted Shirley's challenge as one of my New Year's resolutions. So in between my posts about our lives in Provence, I will share some of the recipes that we think are particularly good and think you should try.

For my first week, I chose recipes from "Patina Cookbook" by chef Joachim Splichal. Patina was a fabulous restaurant in Los Angeles on Melrose Avenue where I had the chance to dine a few times before it relocated to downtown Los Angeles. In addition to Patina, chef Splichal opened Pinot Blanc, a restaurant we really liked in nearby Napa Valley. 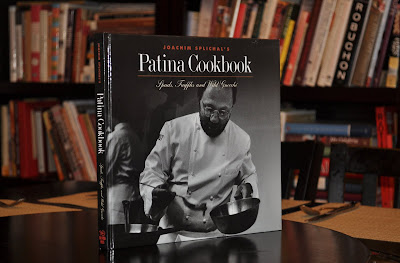 My Patina menu consisted of a first course "Salad of Corn" with sauteed potato, frisée and corn with a balsamic vinaigrette. 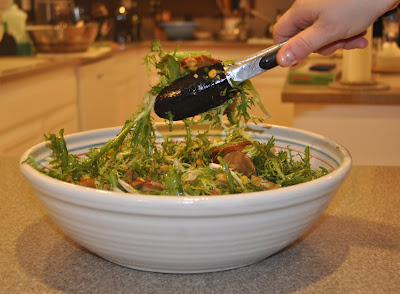 For our main course, I made the "Sea Bass" with creamy lentils and garlic infusion with baby carrots and pearl onions. As you can see, I substituted salmon for sea bass which I could not find. This was the best lentil dish I have ever tasted. Although it's time consuming, I will definitely make this dish again and again. 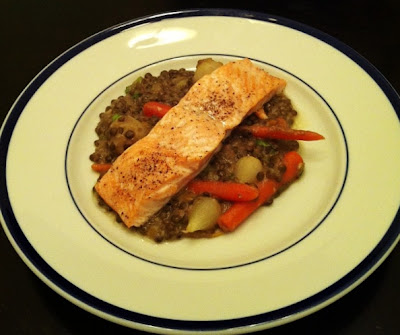 The piece de resistance though was the "Chocolate Croissant Pudding" with Wild Turkey Sauce, the best bread pudding according to Stephanie, a bread pudding aficionado, she has ever had. Served warm, it was almost like a chocolate fondant cake, all warm and gooey bittersweet chocolate inside. 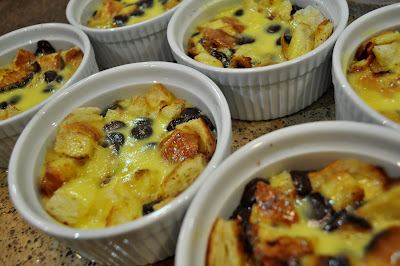 In a small sauce pan, combine the milk with the vanilla bean and seeds and bring just to a boil. Remove from heat and allow to infuse for 5 minutes, then strain out the vanilla pod. Whisk the egg yolks together with the sugar until the mixture is pale and thickened. Pour about a quarter of the hot milk into the egg mixture and mix until well combined, then return the yolk mixture to the pot with the rest of the milk and, over medium-low heat, stir until thickened. Do not allow the mixture to boil. Strain it through a strainer into a clean pan and add the Wild Turkey. Cool the sauce and refrigerate, covered, until chilled.

4 croissants, cut in half horizontally

Preheat the oven to 450 degrees F(230 C). On a baking sheet, toast the croissant halves until golden, about 6 minutes, watching carefully as they burn easily. Remove from the oven and, when cool, cut the croissants up into 1/2 inch pieces and set aside. Reduce the oven to 350 degrees F (175 C).

In a medium saucepan, heat the cream and the vanilla bean together over medium-high heat. Bring the cream to just below boiling point, then remove from the heat and allow to infuse for 5 minutes. Strain out the vanilla pod. In a medium mixing bowl, whisk the egg yolks and sugar together until the mixture is pale and thickened. Gradually whisk the warm cream into the egg yolks and then return the mixture to a clean saucepan. Over medium-low heat, bring the mixture up to just below boil, stirring all the time until thickened, and immediately remove it from the heat.

Arrange an equal amount of toasted croissant pieces in each of six-eight ounce ramekins or ovenproof bowls (I used 10 ounce ramekins). Distribute the chocolate chunks evenly among the ramekins. Spoon the warm custard over the mixture, pressing down with a fork to be sure all the pieces of croissant are soaked in the custard, and cover each ramekin tightly with aluminum foil.

Place the ramekins in a roasting pan and pour in enough very hot water to come halfway up their sides. Bake in the hot oven for 15-20 minutes, or until just set, then pierce the foil with a toothpick to release the steam and let stand for 5 minutes before removing the rest of the foil. (Note: At this stage you could cool and refrigerate the pudding for several hours or overnight. Warm them through in a 400 degree F (205 C) oven for 4 to 5 minutes before serving.)

When you are ready to serve, dust the top of each warm pudding with a little powdered sugar and serve the the chilled sauce in a sauce boat on the side. 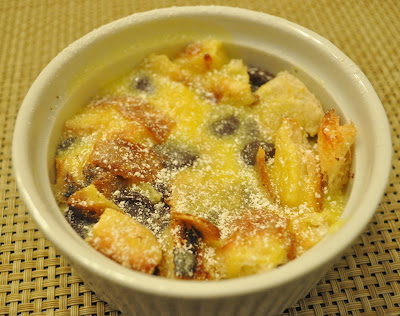 In the words of Jacques Pepin, I wish you happy cooking. Bonne journée mes amis et à bientôt.
Posted by Michel at 9:30 AM