My father Daniel Augsburger was born in Lausanne, Switzerland. His mother was French and at a very young age they moved to the South of France. He came to the United States just prior to the start of World War II (There is much more to that story which I will share in a later post) to go to college. He left behind his parents and three sisters.

As you might have guessed, over the years my father and mother Joyce along with my sister Lydie and brother Danny traveled to Europe as money permitted to visit my father's family living in France and Switzerland.

My father during his early teaching years was Chair of the Modern Language Department and taught French at Emmanuel Missionary College in Berrien Springs, Michigan. Part of the teaching program included trips to Europe which he would lead during the summer which gave us additional opportunities to travel to France.


My very earliest memories of France and where I first fell in love with the country was when we went to visit my father's family who would gather on their family farm called La Metairie Neuve located near the little hamlet of Viane which is about 15 km from Lacaune in Southeast Tarn.

I also fell in love with farms and farm animals although I have never pursued that love besides trying to convince my parents that we should buy a cow for our back yard. 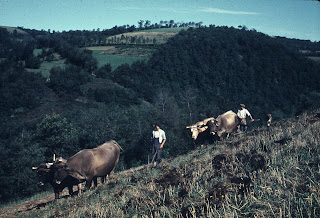 The fields were too steep for tractors; so the cows were hitched up. 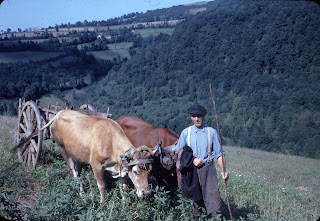 Pépé with two of his cows hauling hay. 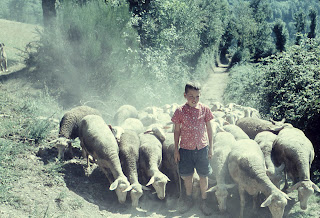 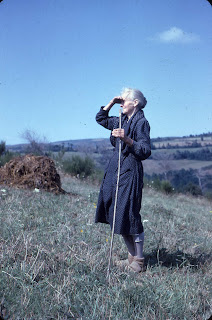 Mémé looking to see where her sheep have wandered off to. 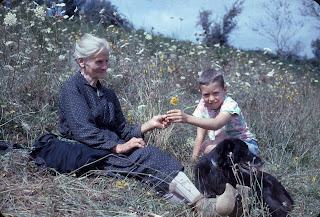 A break for story time with Mémé while we are watching sheep.

The farm was small and in a remote mountainous area of France. They had 80 - 100 sheep, 12 - 20 cows, a work horse and raised chickens, ducks and pigeons and grew all of their produce. La Metairie Neuve is located south of Roquefort and the cheese cooperative from Roquefort sent a truck to pick up the sheep's milk every day.

La Metairie Neuve is where I have my first memory of a meal and where my love of food began. In those days at harvest time, neighbors would join together to bring in the harvest farm by farm.

My first food memory is an amazing harvest lunch put out for the neighbors who came to harvest at La Metairie Neuve. I remember tables of salads and vegetables and especially I recall the most succulent roast chicken.
Posted by Michel at 9:35 AM 1 comment: