Go visit the Pont du Gard if for no other reason, this "masterpiece" has been standing for 2000 years!

Our favorite Roman ruin in the South of France is the Pont du Gard, the aqueduct bridge that crosses the Gardon River about 60 km (37 miles) from our house in Sablet, between the towns of Remoulins and Uzès.

The Pont du Gard is part of a 50 km (31 mile) aqueduct constructed by the Romans in the middle of the 1st century to bring fresh water from the Eure spring near Uzès, to the Roman city of Nîmes where it supplied running water to fountains, baths and private homes around the city.

As you walk out to the Pont du Gard, look for the ancient olive trees on the Left Bank along the path from the Visitor Center. The plaque by one of the trees says it was born in 908 and lived in Spain till 1985 when the Counsel General of the Gard adopted the tree and planted it here in 1988.


Make sure you check out the construction of the bridge, take in the view up or down the river valley, wander across to the far side, explore down along the river and climb up the steps to the upper trail where you have great views of the bridge and surrounding area.


The Pont du Gard was constructed largely without the use of mortar or clamps. Most of the stones were extracted from the Estel quarry located approximately 700 meters (2,300 ft) downstream, on the banks of the Gardon River. The stones were cut to fit perfectly together by friction and gravity, eliminating the need for mortar.

The builders left inscriptions on the stonework conveying various messages and instructions. Many blocks were numbered and inscribed with the required locations, such as fronte dextra or fronte sinistra (front right or front left), to guide the builders

The straight-line distance from the spring near Uzès to the town of Nîmes is only about 20 km (12 mi), but the mostly underground aqueduct was built along a winding route measuring around 50 km (31 mi) to circumvent the southernmost foothills of the Massif Central, known as the Garrigues de Nîmes. This was the only practical way to transport water from the spring to the town.


The Romans needed a way to get the water that would flow through the aqueduct across the Gardon River so they built the Pont du Gard with a water channel to complete the aqueduct and get water to its destination in Nîmes.


It is estimated that the aqueduct supplied Nîmes with around 40,000 cubic meters (8,800,000 imp gal) of water a day that took nearly 27 hours to flow from the spring to the town.


As I noted earlier, the Pont du Gard was built to carry water from the aqueduct across the Gardon River. Several of the River's tributaries are also called Gardon. The Gardon River rises in the Cévennes mountain range and flows for 133 km into the Rhône River at Beaucaire, from where it flows into the Mediterranean Sea.


The Pont du Gard is one of the most popular tourist attractions in France and is open all year round, though the restaurant and some indoor areas close for part of the winter. You can stay there after dark (exact closing times vary depending on the season), when the bridge is illuminated in summer.

As I told you here, a fun way to view the Pont du Gard is from a canoe or kayak on the Gardon River on a hot summer day. There are several companies around Collias that will rent canoes and provide transportation to your point of departure and from your point of arrival.

The Pont du Gard was added to UNESCO's list of World Heritage sites in 1985. The description on the list states: "The Roman architects and hydraulic engineers who designed this bridge created a technical as well as an artistic masterpiece."


When we go, we park in the lot on the Rive Gauche (Left Bank) which is the main entry and parking lot. The main visitor center is on this side, where you walk through to access the Pont du Gard. There is a small charge for parking and they have recently instituted a fee for visiting the Pont du Gard.

The visitors' center is where the ticket machines and information center are located. Here too are restrooms, snack bar, souvenir shops, book store and audio-guides for your visit (available in several languages).

If you have comments or questions about the Pont du Gard, or elsewhere in Provence, please leave your comments below or send me an email at my address below.

If you are thinking about a trip to the South of France including spending time in Provence, we invite you to visit our website. Our house is available for rent by the week or more. We still have some weeks open in April, June, and August. You can reach us for further information by sending an email to chcmichel@aol.com.
Posted by Michel at 6:03 PM 2 comments:

A fall visit to Cassis, a picturesque village along the Mediterranean Sea

Cassis is a picturesque town a little over 1 and 1/2 hours from Sablet snuggled at the bottom of a steep bowl of land along the Mediterranean Sea between calanques (little coastal fjords with tall cliffs), about 25 km east of Marseille.

The area where Cassis now sits was first occupied between 500 and 600 BC by people from Liguria, a region of north-western Italy, who built a fortified habitation at the top of Baou Redon. These people lived by fishing, hunting, and farming.

If you go, I recommend you try to get to Cassis early in the morning since parking is often a challenge. From time to time, we have to park in a remote lot (Relais des Gourgettes) and hike or ride the navette (shuttle bus) to the port.


Cassis remains a small fishing port but the fishing boats now share the harbor with yachts and a collection of boats that tourists can book for visits to the nearby calanques. You will see traditional wooden fishing boats known as pointus tied up along the Quai des Baux.


The port is lined with tourist shops, terrace cafés and restaurants which offer a variety of food and prices. It's always great fun to watch people stroll down Quai des Baux while you soak up the sun in front of one of the cafes that line the port.


The fishermen sell their morning's catch quayside on tables near their boats. The selection changes daily as choice is selon arrivage (dependent on what they catch) that day.


Over the years, many artists and writers have been attracted to Cassis. Frédéric Mistral, the Nobel Prize-winning author and defender of Provençal language and traditions, took a great fancy to Cassis, even though he was not a native of the town.

The writer famously declared, in Provençal, "Qu'a vist Paris, se noun a vist Cassis, pou dire, ‘n'ai rèn vist'." "He who has seen Paris but not Cassis can say, ‘I haven't seen anything'."


The Mediterranean coast near Cassis is known for the calanques ("fjords"), a series of white limestone rocks scored through with deep valleys that extend for almost 20 km (12.4 miles) along the Mediterranean between Cassis and Marseille.

A fun activity for Cassis visitors is a boat trip out to the calanques. There is a kiosk on Quai Saint-Pierre that sells tickets for all the charter boats that line the Cassis port for trips out to 3, 7 or 13 calanques. It takes about 45-minutes for a boat tour out and back to see 3 of the closest calanques.

Port Miou seen in the picture below is the closest calanques and easiest to reach from the center of Cassis. The Romans used Port Miou as a harbor. In fact, its name comes from the Latin portus melior: the best port. It's the deepest and most sheltered of the calanques between Cassis and Marseille.


Port Pin is the smallest and most intimate of the three calanques of Cassis. It is surrounded by Aleppo pine trees typical of this part of the Mediterranean.


Port Pin boasts a small sand and shingle beach and the water here - emerald or turquoise depending on the light - is very clear and perfect for swimming.

En Vau is the most spectacular of the three calanques closest to Cassis and also the most difficult to get to. Extremely steep, it's popular with rock-climbers, there is a little shingle beach.

There are four public beach areas in Cassis. The Grand Mer beach is the main beach near the center of town and consists of sand and pebbles.


Besides its stunning location and the calanques, Cassis is also famous for its wine. When you exit off the A50 auto route, the road down to Cassis is a winding road that goes past vineyards planted on steep hills between olive groves and country houses above Cassis.

By the way, don't confuse the wines of Cassis with crème de cassis, a sweet black currant liqueur, a specialty of Burgundy which takes its name from black currants (cassis), not this town. 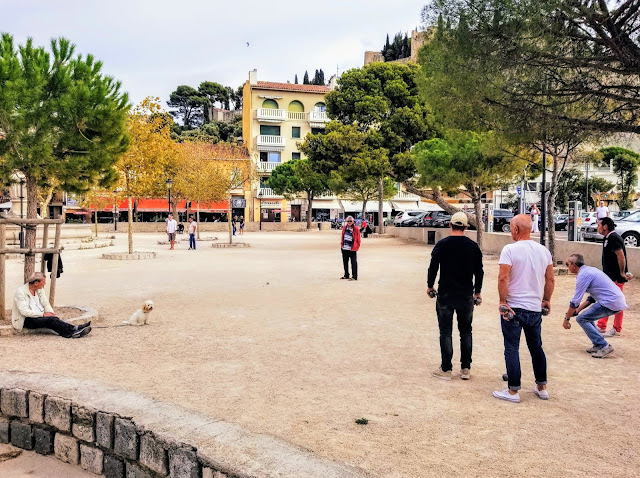 The route des Crêtes (a generic term meaning "road across the crests"), is a 15 km (9 miles) stretch of road, that takes you between Cassis and La Ciotat, with 360 degree views over some of the most superb scenery in Provence along the way.

The route des Crêtes is closed to traffic (and hikers) on days of very strong wind and/or when fire risk is high. There are road signs as you approach it from Cassis and La Ciotat that will let you know if the road is open.


If you have comments or questions about Cassis, or elsewhere in Provence, please leave your comments below or send me an email at my address below.

If you are thinking about a trip to the South of France including spending time in Provence, we invite you to visit our website. Our house is available for rent by the week or more. We still have some weeks open in April, June, and August. You can reach us for further information by sending an email to chcmichel@aol.com.