We go to towns and villages like Avignon, Chateauneuf-du-Pape, Vaison-la-Romaine, Gordes, Roussillon, Cassis, and Les Baux for the scenery, history, markets, and wine and learn about others because we went there to try a new restaurant or visit a winery we had heard or read about.

When we go to a "new" village to try a "resto," we generally wander around town and follow the path to the ruins of a castle or to a church at the highest point. There are usually great views over the village and surrounding countryside, not to mention photo opportunities for a blogger.

I had heard about Auberge d'Anaïs, a small hotel and restaurant out among the vineyards near Entrechaux, so off we went. We had been to Entrechaux previously to dine at Saint Hubert and L'Ancienne Poste, but that was at night so we couldn't see the village.


Entrechaux is located about 25 minutes northeast of Sablet and 7 km from Vaison-la-Romaine at the border of the Department of the Vaucluse and Drôme. The landscape around Entrechaux shows a transition from the plains to Mont Ventoux.


No matter which route you take to Entrechaux, the ruins of the Entrechaux Castle can be seen from afar. Perched on a peak at 900 feet elevation, the origin of the Castle goes back to the 10th or 11th centuries. There is nothing recorded about the origin or first occupants of the Castle.


There is an Intercallis (means intersection) Monument in the middle of the main street, seen below, probably erected there as several pathways and rivers (Ouvèze, Toulourenc, Aigue Marce) intersect in Entrechaux.

It took some effort to find our way through the countryside and across an old bridge over the Ouvèze River before we came to the dirt road which leads to Auberge d'Anaïs.


As we pulled into the parking lot, Auberge d'Anaïs gave the impression of an old Provençal farmhouse set in the vineyards. Come to find out, Auberge d'Anaïs has 7 hotel rooms and offers guests the use of a swimming pool.


The restaurant at Auberge d'Anaïs has a lovely shaded terrace for dining on nice days and a pretty dining room with white-linen covered tablecloths for cold weather. I had been told that the chef offers well-prepared, simple Provençal dishes, for unbelievable prices and true enough, prices for menus start at 12,50 € for the three-course menu of the day which includes 1/4 liter of Domaine Talès wine.


Our rule is that when we eat lunch on a terrace, we choose a local rosé to accompany our meal. So we chose a bottle of rosé from Domaine Talès who own the vineyards next to Auberge d'Anaïs. The 2012 Ventoux rosé is a refreshing fruity blend of Cinsault (40%), Grenache (30%) and Syrah (30%).


The food served at Auberge d'Anaïs is simply prepared and plated, perfect for an al fresco country lunch. While it was very tasty, it is not refined cooking like some of the other restaurants I have told you about most recently. The pictures which follow show our choices. I should mention we did not choose the 12,50 € menu of the day.

On the way back to Entrechaux, we stopped to check out Saint Michel Roman Bridge and the nearby area along the Ouvèze River. Even early in June, there were sunbathers and a few kids playing in the water. We will return to this spot with our grand kids when they are back in Provence.


Begun around 900, the Petit Château (Little Castle), with its fortified chapel dedicated to St Quenin and a cistern dug into the rock, was built by the Bishops of Vaison.


The village lord constructed the Grand Château (Big Castle), below the first, with a square keep more than 65 feet high, a chapel dedicated to St Laurent and several other buildings, surrounded by defensive walls. A gatehouse with a balcony served both castles.[


A band of outlaws pillaged the castle on September 9, 1792. The sale of stones by the municipality and vandalism by inhabitants led to its ruin. The castle was treated as a quarry.


The Entrechaux castle is now privately owned, and each year the owner offers stone-cutting workshops as part of a restoration program. The pictures that follow show the views below the castle and sites we came across as we wandered around the grounds of the Entrechaux castle. 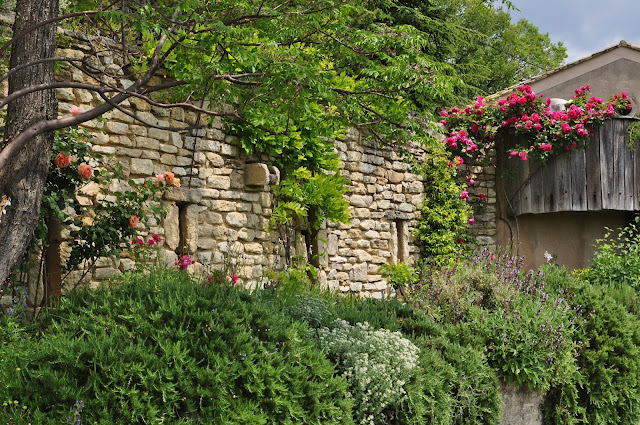 Saint Laurent church was built up against the defensive wall in the twelfth century. The Church has a single nave and vaulted arch with a semicircular apse. It was restored in the seventeenth century.


The Saint Michel Roman Bridge and Entrechaux Castle are worthwhile reasons to visit Entrechaux. There are several good dining options in the area including out in the country at Auberge d'Anaïs.

La Fourchette Restaurant, an Excellent Place to Dine in Avignon

I know very few people who maintain schedules like cousin Jean-Marc. He consults with cardiology patients, teaches medical students, speaks at conferences all over the world, writes papers for journals and looks after our elderly aunts and uncles. Despite this schedule, he is always there for family and makes time to see us multiple times when we are in Sablet.

His son Matthias has spent several summers at our home in California and in fact Shirley calls him her "summer son." Matthias lives in Paris with girlfriend Aurélie where they are finishing law school at the Sorbonne. He is a special part of our family and tries to spend time with us every time we are in Sablet.

One Tuesday in June when Matthias was visiting for a few days, Jean-Marc arranged his schedule so he could meet us for lunch in Avignon, roughly midway between Sablet and Montpellier where he teaches medicine at the University of Montpellier, and then we would go see cousins André and Mauricette in nearby Villeneuve-lès-Avignon.

We parked and headed toward the restaurant. As we made our way through the crowds of tourists taking pictures of the Palais des Papes, we passed the Opera-Theatre seen below, built in 1825 on Place de l’Horloge. Rebuilt in 1847 after a fire, the Opera House offers music, dance, theater and opera performances throughout the year.


Immediately left of the Opera-Theatre is the Hotel de Ville built in 1845 on the west side of Place de l'Horloge (Clock Square). As I told you here, the City of Avignon sets up a Provençal crèche with 600 santons in the lobby of the Hotel de Ville at Christmas time. A santon is a small hand-painted, terracotta figurine produced by artisans in Provence. The santons represent various characters from Provençal village life such as the baker, the winemaker, and the farmer wife with eggs.


The 14th and 15th century clock tower that gives its name to Place de l'Horloge (Clock Square) is separated from this lively brasserie-filled square by the Hotel de Ville.


We were headed to La Fourchette, a restaurant owned by Philippe and Danièle Hiély since 1982.


Chef Hiély offers a three-course menu with 10 tasty options for both starter and main course for 33 €. Cousins Jean-Marc and Matthias pause for a picture while we wait for entrées (first course) to be brought to our table.


Our entrées choices included this Shrimp with Chinese Cabbage;


Shirley had the Ravioli of Brousse Cheese and Spinach with Saffron Sauce;


And I had the Tomato Eggplant Tart with Mâche.


Monkfish over Zucchini with a Verbena Sauce;


A yummy Fennel Gratin accompanied the whole roasted fish. This was so good I have been trying to replicate this at home.


For desserts, we chose a Meringue with Hot Chocolate Sauce;


And a Praline Meringue.


When you are with Jean-Marc, there is no question if you will take an espresso to finish your meal.


This was our second time to dine at La Fourchette and both meals were excellent. I wouldn't order the Tomato Eggplant Tart again. While it was very good, it didn't compare to the other starters and options on the menu. I am asked frequently about places to dine in Avignon and La Fourchette would be one of my top choices.

Have a great weekend! A bientot.
Posted by Michel at 7:42 AM 4 comments: