Lavender fields in Vaucluse and nearby Drôme Provençale

It's a toss up between coquelicots (red poppies) and lavender but probably no other scent or sight says Provence better than the pungent aroma of a purple field of lavender growing in mounded rows under a brilliant blue summer sky.

We were lucky that it was lavender season when we were in Sablet last summer with our daughter Tricia, husband Alvin and grandkids Avery and Caedon. The pictures which follow show the lavender fields we found during outings to the Drôme Provençale area west of Nyons, the Sénanque Abbey and to Sault.

Three species of lavender grow in Provence: true lavender (lavande) is found high up in dry, rocky soil. Aspic which grows lower down is similar to lavande except it has broader leaves and its branches hold a number of stems. And less refined, lavandin is a hybrid of lavande and aspic.

Lavande is most highly regarded by perfume makers for its sweet essential oils, though aspic and especially lavandin are more productive and therefore more common - ending up in laundry and household products.


The Sénanque Abbey is a beautiful Cistercian abbey located in the deep Senancole valley a short distance north of Gordes and well worth a visit anytime you are in the area. But the best time to go is when the lavender fields that stretch out from the Abbey are in full bloom.

The Sénanque Abbey was founded in 1148 under the patronage of Alfant, bishop of Cavaillon, and Raymond Berenger II, Count of Provence, by Cistercian monks who came from Mazan Abbey in the Ardeche. In the 13th and 14th centuries, the Abbey reached its greatest height, operating four mills, seven granges and possessing large estates in Provence

During the Wars of Religion, the quarters for the lay brothers were destroyed and the Sénanque Abbey was ransacked by Huguenots. At the French Revolution, the Abbey's lands were nationalized, the one remaining monk was expelled and Sénanque itself was sold to a private individual.

The site was repurchased in 1854 for a new community of Cistercian monks of the Immaculate Conception, under a rule less stringent than that of the Trappists. The community was expelled in 1903 and departed to the Order's headquarters, Lerins Abbey on the island of St. Honorat, near Cannes. A small community returned in 1988.


The Sénanque Abbey is an active community with a handful of elderly monks. The monks grow the lavender and tend to honey bees to earn income for living and upkeep of the Abbey.


The Sénanque Abbey along with two other early Cistercian abbeys in Provence, Silvacane Abbey and Le Thoronet Abbey, are sometimes referred to as the "Three Sisters of Provence"

Sault is an old fortified village that sits on a ridge overlooking a large valley dotted with lavender fields about one hour from Sablet. The name Sault comes from "Saltus" referring to the forests that covered the area.

We don't get to be in Sablet during the summer every year so we miss out on the lavender most years, which is obviously a mistake.
Posted by Michel at 5:54 PM 2 comments:

The moment we saw that the 2016 Tour de France included a climb up 6,273 foot Mont Ventoux, we decided we would be in Sablet that day. As you can see below, the stage was to begin in Montpellier and the riders would pedal 184 km before finishing at the top of Mont Ventoux.


We had been told that thousands of people had been camping for days on Mont Ventoux and it would be impossible to find a place to park or see the race with good visibility on the mountain. So we opted to stay below and watch the caravan and riders from a location in Bédoin, a pretty village that sits at the foot of Mont Ventoux.

The first thing you'll notice when you get close to Bédoin is a large, imposing, Spanish-looking church, quite different from most others in Provence. In fact, Saint-Pierre Church is Jesuit, built in 1702 and restored in the 19th century. In spite of the different style, the church does have a wrought-iron belfry so typical of the region.

From a distance, the houses of this compact, old village look small compared to the church, and are clustered up against the hill. Inside the old village it's looks typically Medieval, with long, narrow streets between tall old buildings, many with ancient stone doorways and some colorful Provencal facades.


Stage 12 of the Tour de France began with 125kph winds moving the finish from the moonscape of the summit down the mountain 7 km to Chalet Reynard, where the forest gives way to the more exposed road that leads to the summit. There was a fear that riders would be blown off their bikes as soon as they came out of the forest.


We found a place to park in a field that had been turned into a parking lot for the day just outside of Bédoin on the road that leads to Crillon-le-Brave and walked into the village. Since it was several hours before the first cars in the Caravan were due to arrive, Shirley went shopping and I went to look for a place for lunch.


I got the last open table at Le Gousse d'Ail and waited for Shirley to arrive. We had a really nice meal which included Cannelloni of zucchini and goat cheese, Filet of Merlan with cheesy polenta, and Parmentier of Guardian and finished with a Fig gratin. During the course of the meal, I got into a conversation, as I often do, with the French lady sitting at the table next to us.

As we got up to leave and said our goodbyes to our new friend, she said "take my wrist bands and go sit in the VIP review stands so you have a good view of the race. I will go and watch from the street. We were thrilled and thanked her repeatedly.

Those who have not seen the Tour caravan in person may find it difficult to understand the allure. It’s just a parade, right? It is, but on a scale seen nowhere else on earth. It’s a parade that covers 3,360 kilometers, every last meter of the Tour de France route, passing by millions of fans, throwing 14 million tiny trinkets and gifts; a parade that represents, directly and indirectly, a significant portion of Tour revenue.

The caravan is a 45-minute string of vehicles, each modified and decorated by advertisers, that rolls ahead of the Tour peloton. It was founded in 1930, conjured up by Tour founder Henri Desgrange, conceived originally as a way to pay for the organizer-supplied bicycles that riders had to use at the time. Its commercial success was immediate, and has never waned.


In the pictures which follow, you can see a lot of the action that occurred in front of the reviewing stand.

There are 5 camera-equipped motorbikes in the convoy. These are registered to Euro Media Group which provides the live-feed for all coverage. Near the finish, one of these camera-equipped motorbikes stopped without warning directly in front of Richie Porte of BMC, Bauke Mollema of Trek-Segafredo, and Chris Froome in the yellow jersey. Porte smashed directly into the camera, followed by Mollema and Froome, but only Froome’s bike came out of the tangle completely unrideable.


As I told you earlier, Chris Froome's bike was broken when he, Richie Porte and Bauke Mollema collided with a television bike on the crowded road a little over a kilometer before the finish line. Mollema disentangled his bike and remounted, but Porte’s chain was off and Froome’s was unrideable.

Chris Froome took off running just as fast as his cycling shoes would allow up the mountain before taking a bike from the neutral service car, but struggled to gain traction on the ill-fitting bike and had to swap it again when his team car finally made it through.

Froome lost around a minute and a half on the road and slipped to sixth on the provisional general classification, 53 seconds behind fellow Briton Adam Yates, before the race jury intervened.

They ruled that Porte and Froome should receive the same time as Mollema who got back on his bike and stayed clear of the chasing rivals. Thus Chris Froome retained the overall general classification lead of the Tour de France.


At the end, Thomas de Gendt of Belgium (Team Lotto-Soudal) was the winner of Stage 12 after he outsprinted fellow Belgian Serge Pauwels of Team Dimension Data after surviving a day-long breakaway. 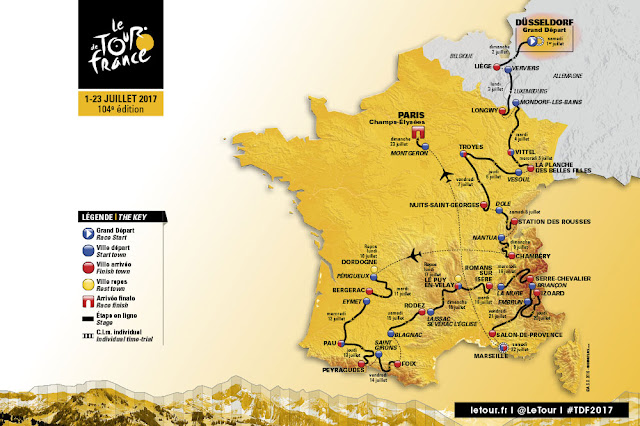 Posted by Michel at 5:28 PM No comments: