Suzette, a little jewel of a village in the Dentelles de Montmirail.

We are getting close to the time for us to return home to Sablet for our fall sojourn so we have started to plan our day trips and visits to French family and friends and deciding where to taste wine and dine. It is critical that we get the latter two correct.


One day early last spring, we were driving around the Dentelles de Montmirail when we arrived at the entrance to Suzette, a tiny village we pass through on the Route des Vins. We have passed through the village multiple times but had never stopped, so having some time, we decided this was the day to do so.


Suzette is a pretty name for a tiny village (population 120) sitting at 1300 feet elevation on the eastern side of the Dentelles de Montmirail surrounded by terraced vineyards of the Beaumes-de-Venise Appellation. The wine Appellations of Gigondas and Vacqueryas are nearby.


The village has one principal street that ascends up the hill and one restaurant. There is no boulangerie; villagers get their bread at “un dépôt de pain” in neighboring Lafare or at boulangeries in Beaumes-de-Venise.


There is also a parish church in the village dedicated to Notre Dame built in a Romanesque style between the end of the 11th century and beginning of the 12th century. It is probably not a creation of the Templars as has long been claimed.

The territory of Suzette seems to have been occupied since ancient times. Gallo-Roman remains have been found at several sites: tiles, column shafts and coins from the reign of Hadrian (76-138 AD).


If you like to go rock climbing or hiking, Suzette is a great starting point for both of these activities.


If you are making the tour around the Dentelles de Montmirail on the Route des Vins, save an hour for a walk around Suzette and visit to the little church. I hope you are enjoying your holiday weekend. Chat soon.
Posted by Michel at 3:47 PM 2 comments:

Les Baux de Provence, a Beautiful Village in the Alpilles

After a delightful lunch at Sous les Micocouliers restaurant in the village of Eygalières that I told you about here, we took off for Les Baux de Provence, a 30 minute drive through the scenic Alpilles countryside.

Les Baux de Provence is a picturesque village about 75 kms southwest of our house in Sablet. The village sits in a spectacular site on a rocky outcrop with ancient houses and a ruined castle perched on top of the village overlooking the plains to the south. The road to Les Baux from the south takes you past olive groves and vineyards.

The village is officially classified as one of the Les Plus Beaux Villages de France - one of the most beautiful villages of France. The beauty of the village and surrounding Alpilles, a small range of mountains, makes Les Baux de Provence a very popular place for visitors all year long.

The name Les Baux refers to its site - in Provençal, a baou is a rocky spur. Aluminum ore bauxite was first discovered near Les Baux in 1822 and named after the village of Les Baux de Provence. Bauxite was mined extensively in the area but by the end of the 20th century, the bauxite had been completely removed.


You have to pay to park your car near the village but parking is allowed for free along the road leading up to the village. Just inside, is the Maison du Roy - King's House, built in 1499. The King's House now houses the Office de Tourisme - Tourist Office. 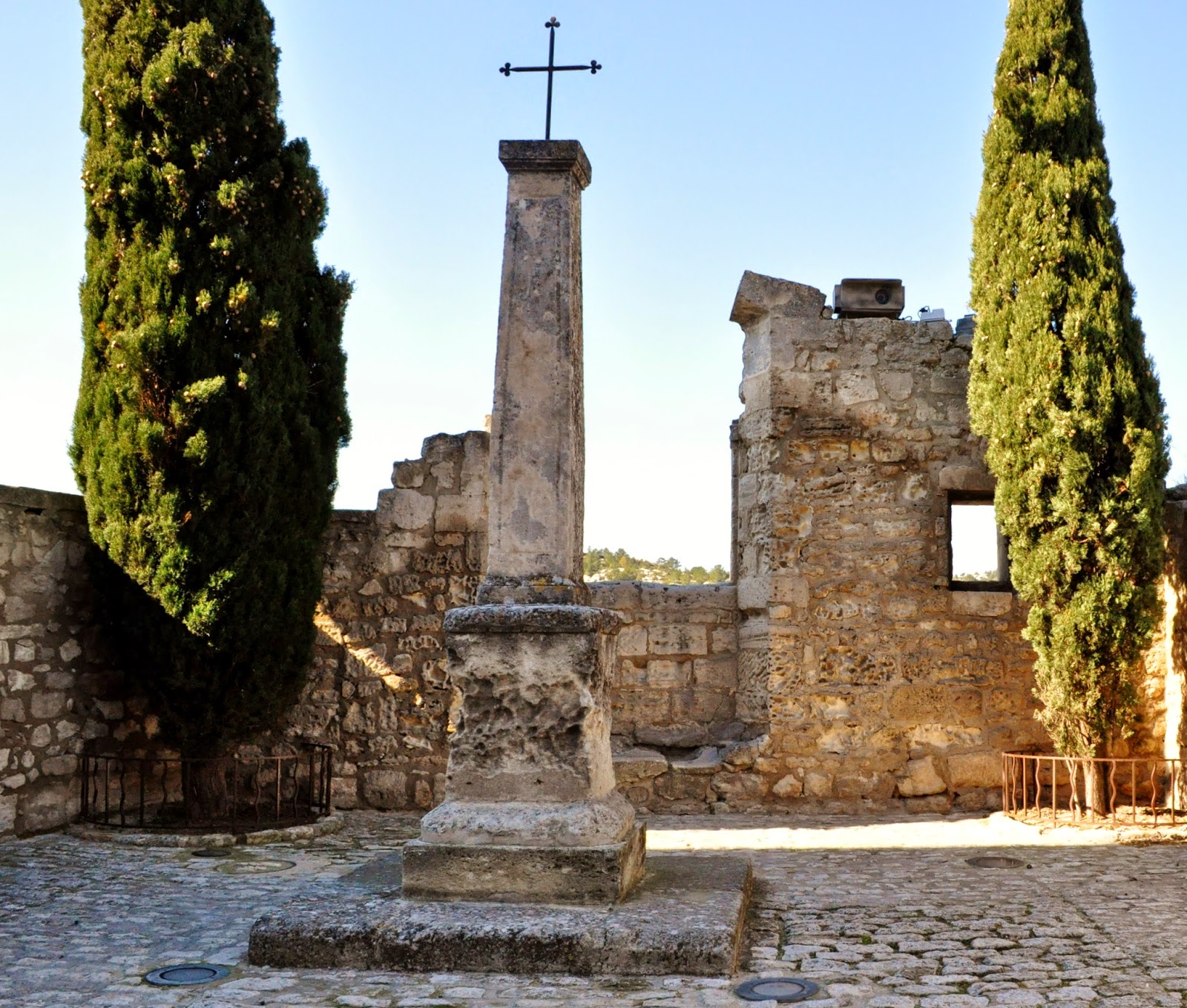 The Musée des Santons - the museum of santons (santons are plaster-moulded, kiln-fired nativity figurines dressed in traditional Provençal costumes) contains a large number of exhibits including some figurines made in Naples, scenes illustrating the traditions of Provence and Les Baux linked to the Nativity and a documentary film on the manufacture of these figurines.


The town's finest Renaissance mansion was built in 1571 for a rich protestant family headed by Claude de Manville. The irregular frontage following the line of the main street contains many wide mullioned windows, ensuring plenty of light for the interior. The inner courtyard with its porticos repeats the same ordered layout as the Renaissance mullions. The mansion has been restored and is now the Town Hall. 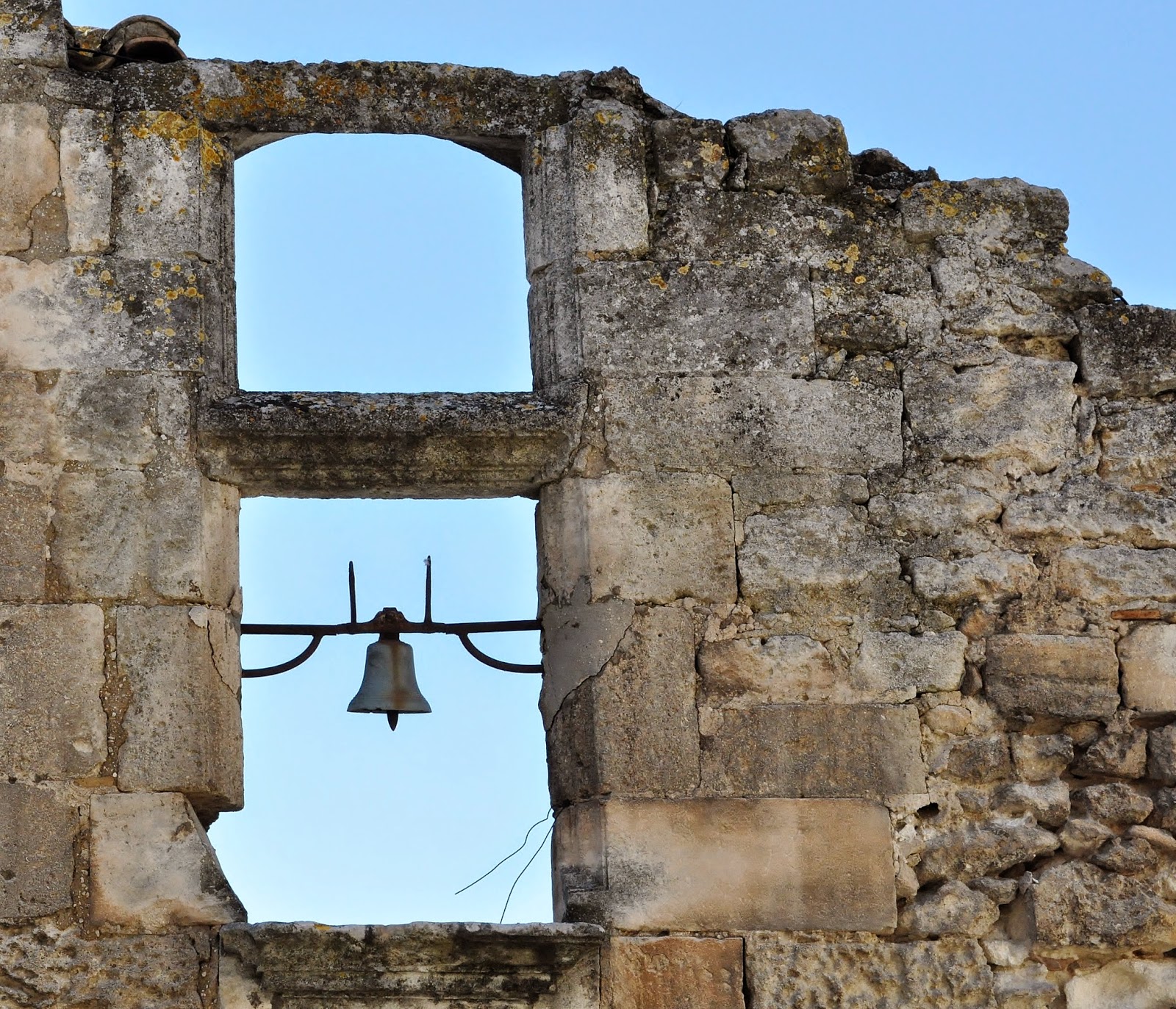 On Place de l'Église (church square), on the edge of a cliff overlooking the Fontaine Valley, stands a chapel built in the mid 17th century by the Brotherhood of White Penitents. It was rebuilt from ruins in 1937 by the Brotherhoods of Langue d'Oc and dedicated to Saint Estelle who has been asked to watch over the memory of the old penitents from Les Baux.

The huge doorway decorated with rusticated masonry and topped by a low relief showing two penitents kneeling and bearing the inscription, "In nomine Jesu omne genus flectatur" (In the name of Jesus, every knee shall bow).


The interior of the chapel, which once had ribbed vaulting, is decorated with frescoes by Yves Brayer representing the Shepherds' Christmas in the Provençal tradition.

Once a monastery dependent on Saint-Paul de Mausole in Saint-Rémy de Provence, the 12th-century Saint Vincent Church is typical of the buildings in Les Baux with its southern section built half into the rock. The nave, which has ribbed barrel vaulting, was extended eastwards in 1609 without breaking the Romanesque harmony of the building.

Above the doorway and a rounded window, there is a superb sculpture of a lion. On the south side, the Lantern of the Deceased is an elegant circular turret topped by a cupola decorated with gargoyles. Tradition has it that a fire was lit in the turret whenever somebody from Les Baux passed away.


Inside are some modern stained-glass windows by Max Ingrand, a gift from Prince Rainier III of Monaco. There is also the funeral chapel of the Manville family with flamboyant gothic vaulting and, in the chapel dug into the rock, the ceremonial cart used for the "pastrage" ceremony during midnight mass when the cart carries the newborn lamb offered to the Baby Jesus by the shepherds. 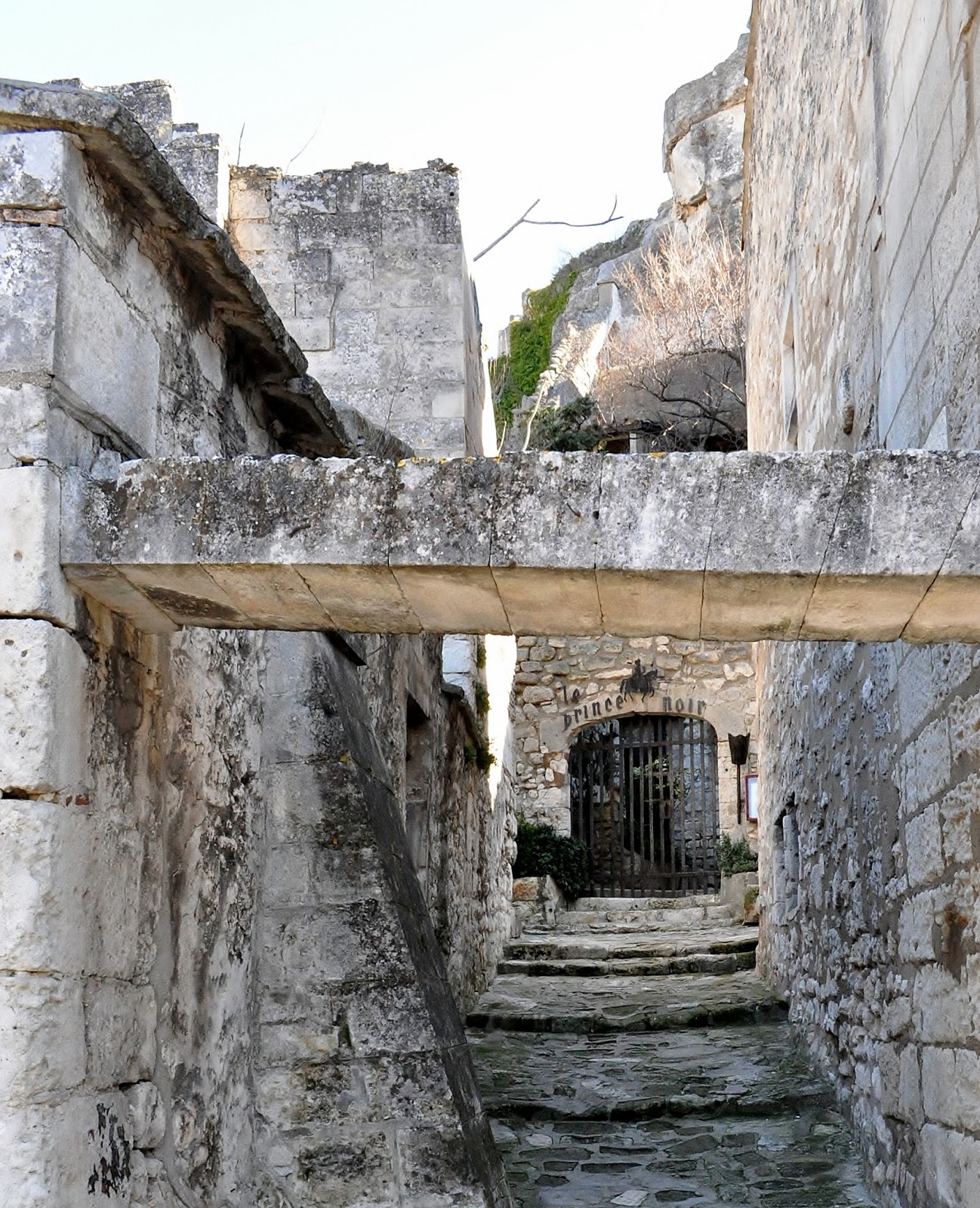 St. Blaise's Chapel, once used by the wool combers and weavers guild as a meeting place, is now a theater where visitors can watch a free film entitled "A Bird's-Eye View of Provence" which runs non-stop.


The plateau on which the castle of Les Baux de Provence sits covers 17.3 acres. The castle contains an exhibition of siege machines including a trebuchet, a couillard (a form of trebuchet with split counterweights and a rotating beam), a bricole (a rotating-beam stone-throwing device), and a battering ram.

The machines are full-sized replicas and the catapults can fire to distances in excess of 200 meters or 650 feet. Firing demonstrations of the siege machines take place daily from April to September.


The breath-taking views from the castle are worth the entrance fee alone. Its hard to believe that 4000 people one time lived on this desolate plateau.


Charloun Rieu was a farmer from Paradou, a Provençal poet nicknamed "Charloun dou Paradou". He is considered one of Provence's most authentic popular poetic voices, he did much to revive Provençal language and culture.

His best known collection is the Chants du Terroir - Songs of the Land, published in 1897.

This monument by the Marseillais sculptor Botinelly was erected in 1930 to commemorate the man who immortalized Les Baux de Provence in verse.

A windmill was a feudal privilege, built and maintained by the Lords of Les Baux, it was accessible to all. In return for a small payment, farmers would come with their donkeys loaded with wheat, chat with the local folks and leave with their freshly ground flour.

The present day windmill was built on this windy hillside after the Maréchal de Vitry pulled down every windmill in the castle and village in 1632 and faithfully mirrors the image of Provence in the writings of Frédéric Mistral and Alphonse Daudet.


The upper town in Les Baux had neither well nor spring. The townspeople would collect their water from a place called Carita in the valley. In 1868 a cistern was built in the square in front of Saint Vincent Church. Rainwater was collected on this 3,000 square meter paved area known as an impluvium.


The battering ram was recently restored. 26 feet long, it was used to break down the gates of towns and fortresses, whilst protecting the assailants under its heavy wheeled framework from projectiles, even if they were on fire. Its framework was covered with flame-resistant materials: manure, earth, long grass, etc. 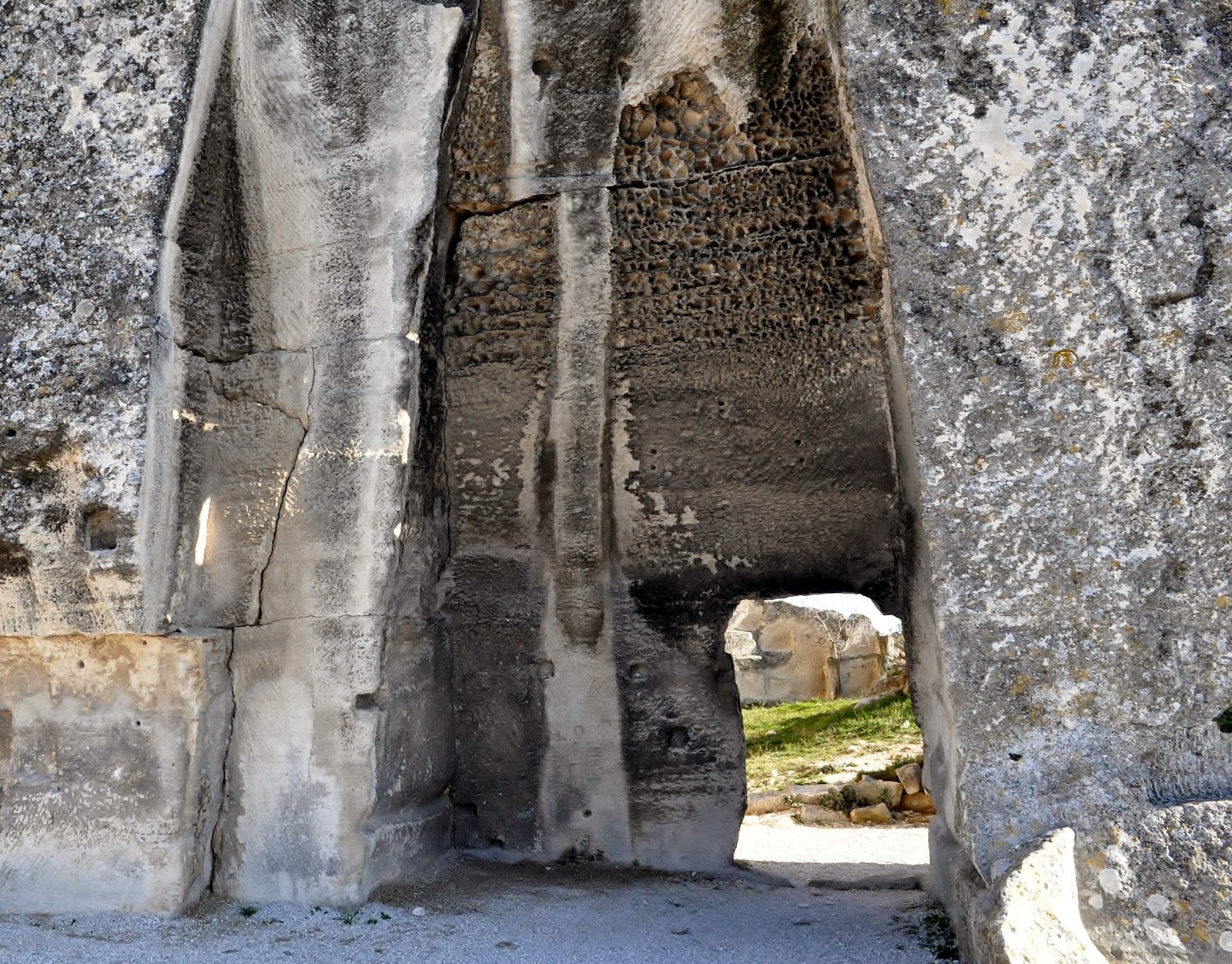 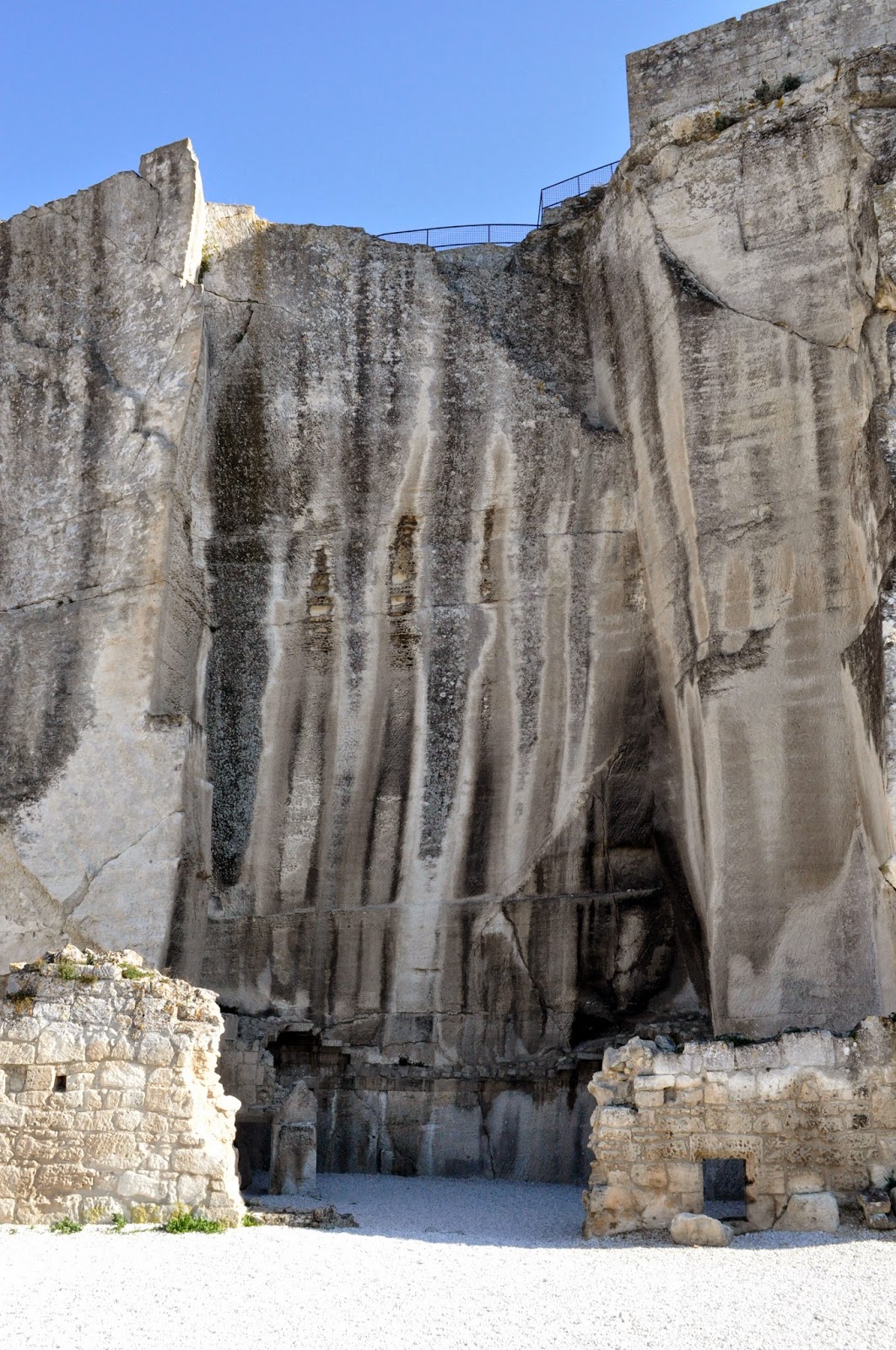 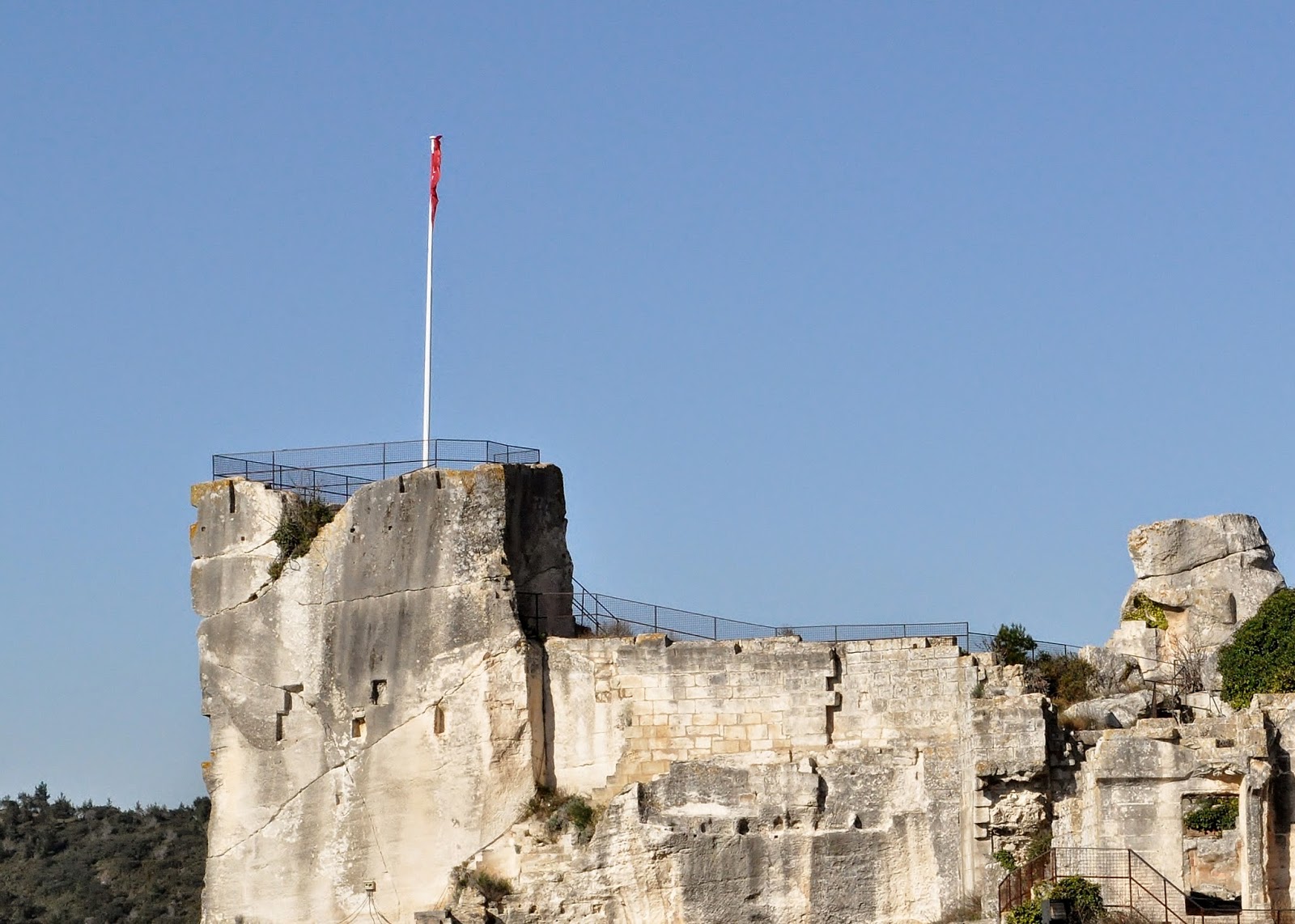 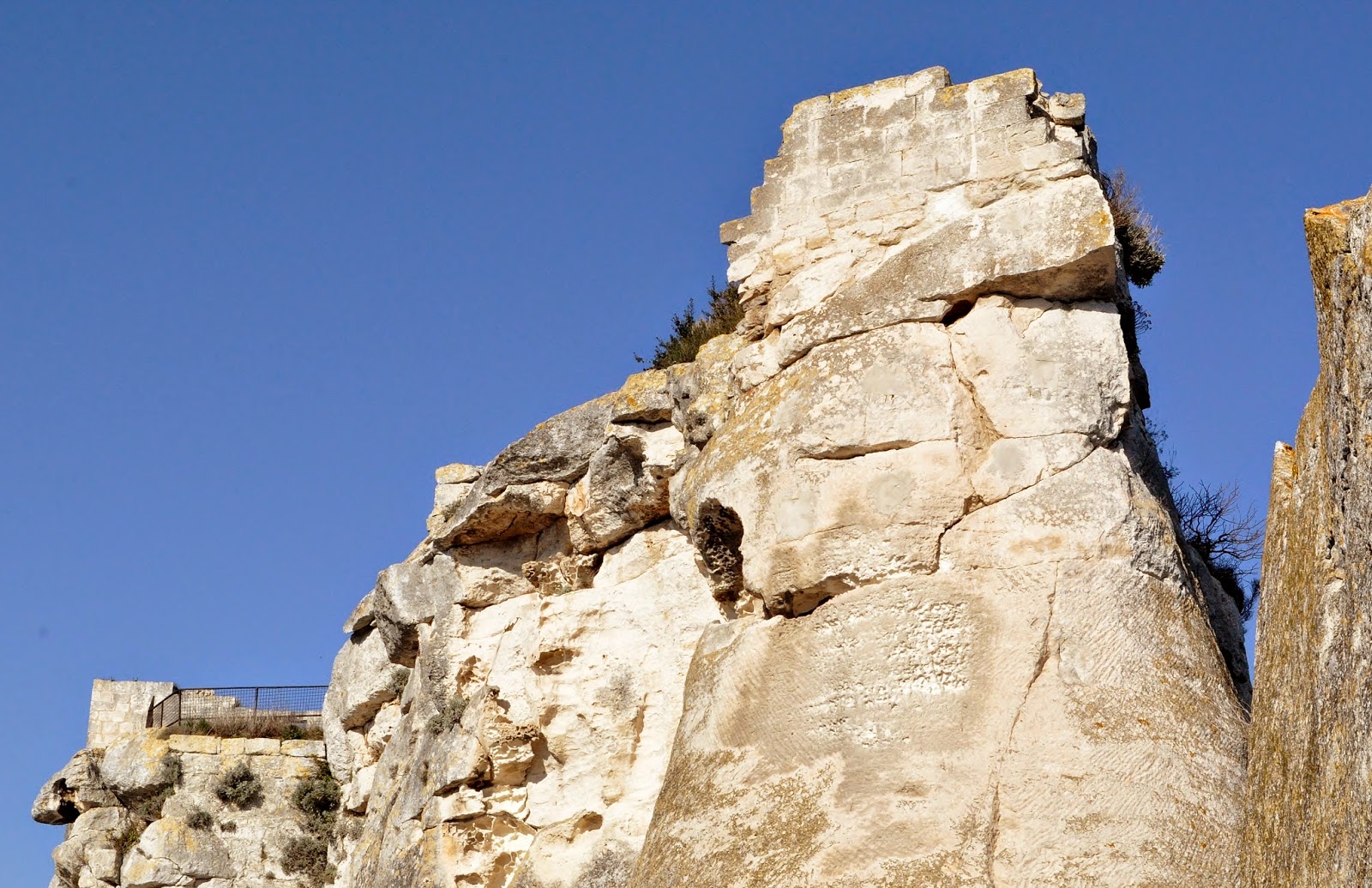 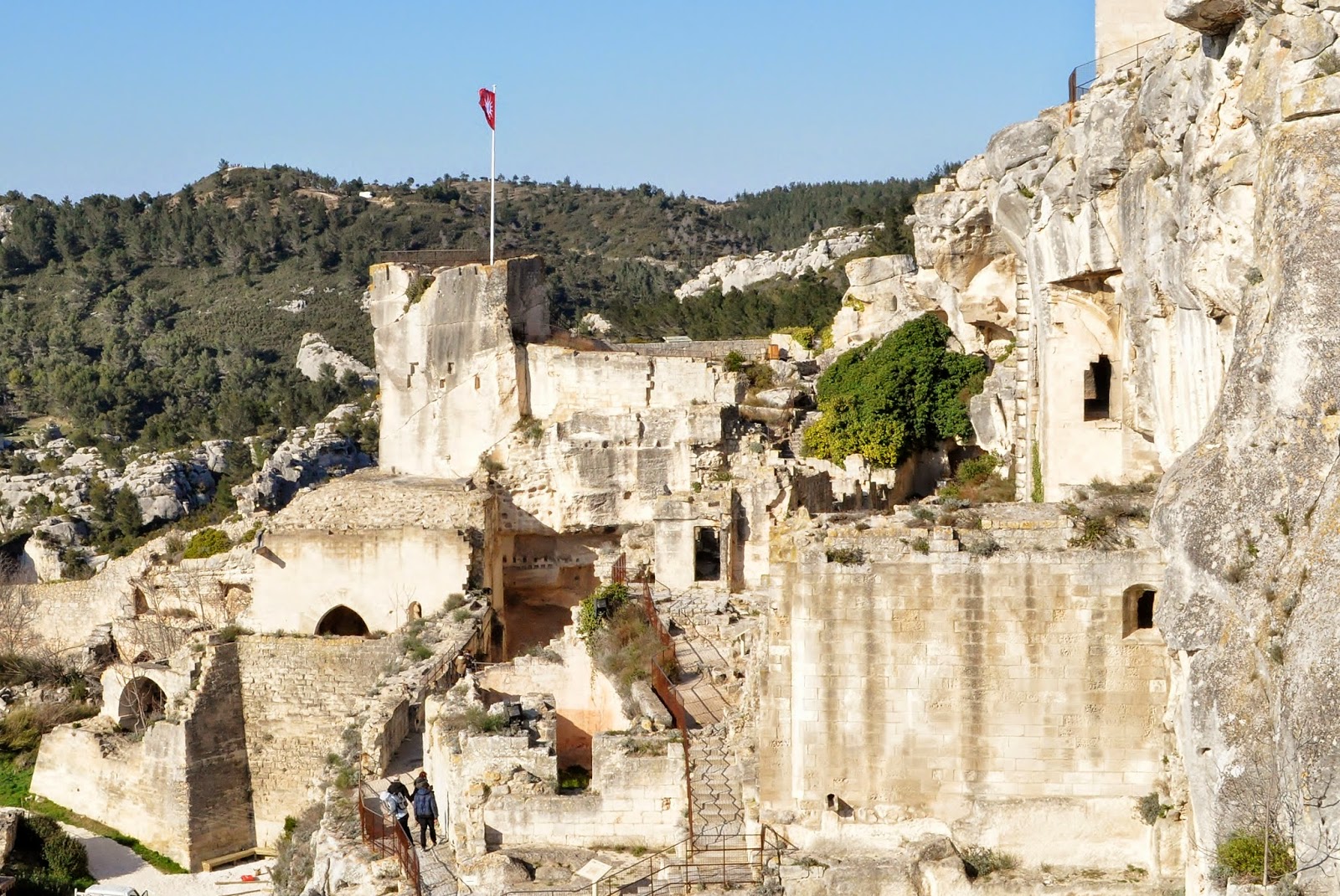 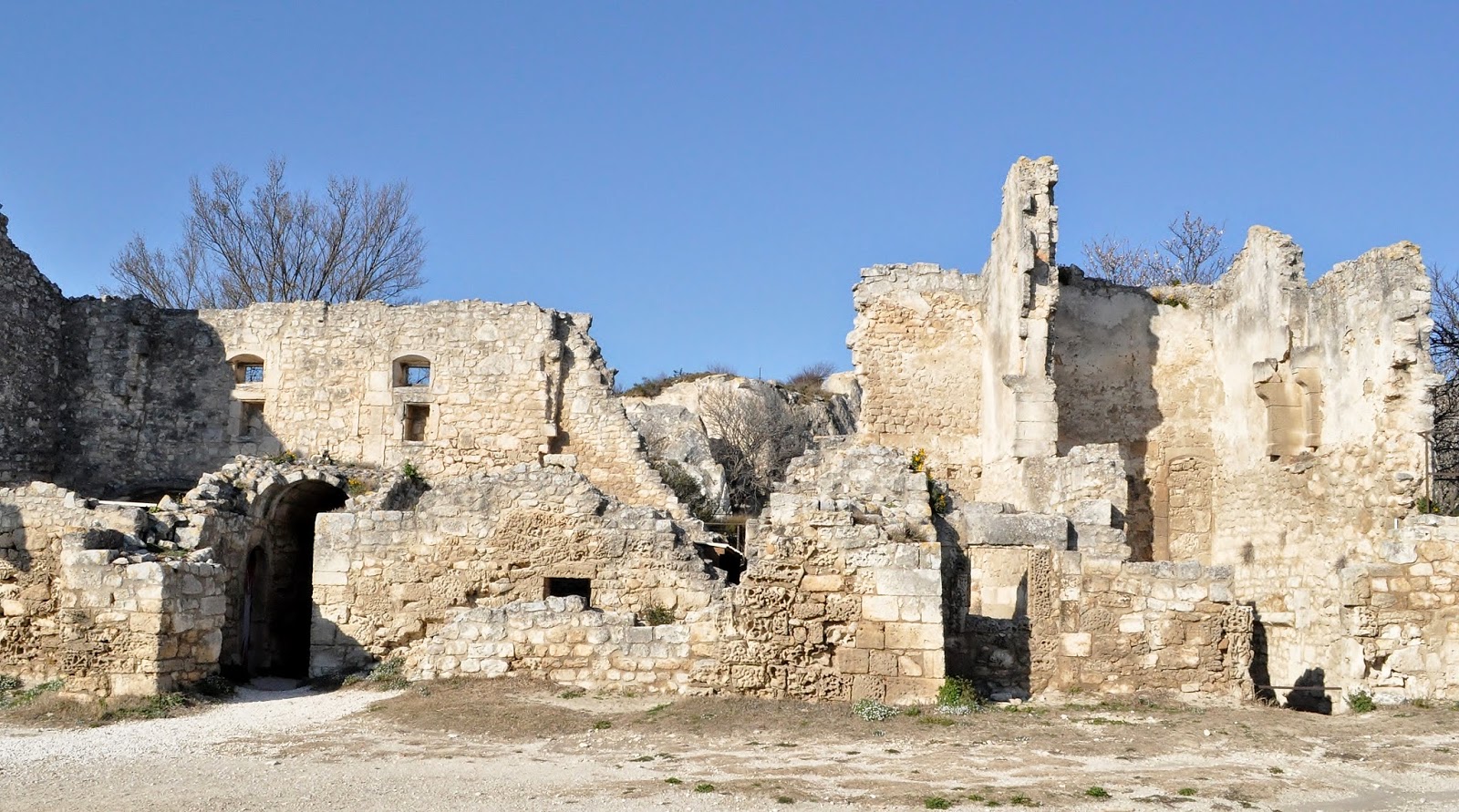 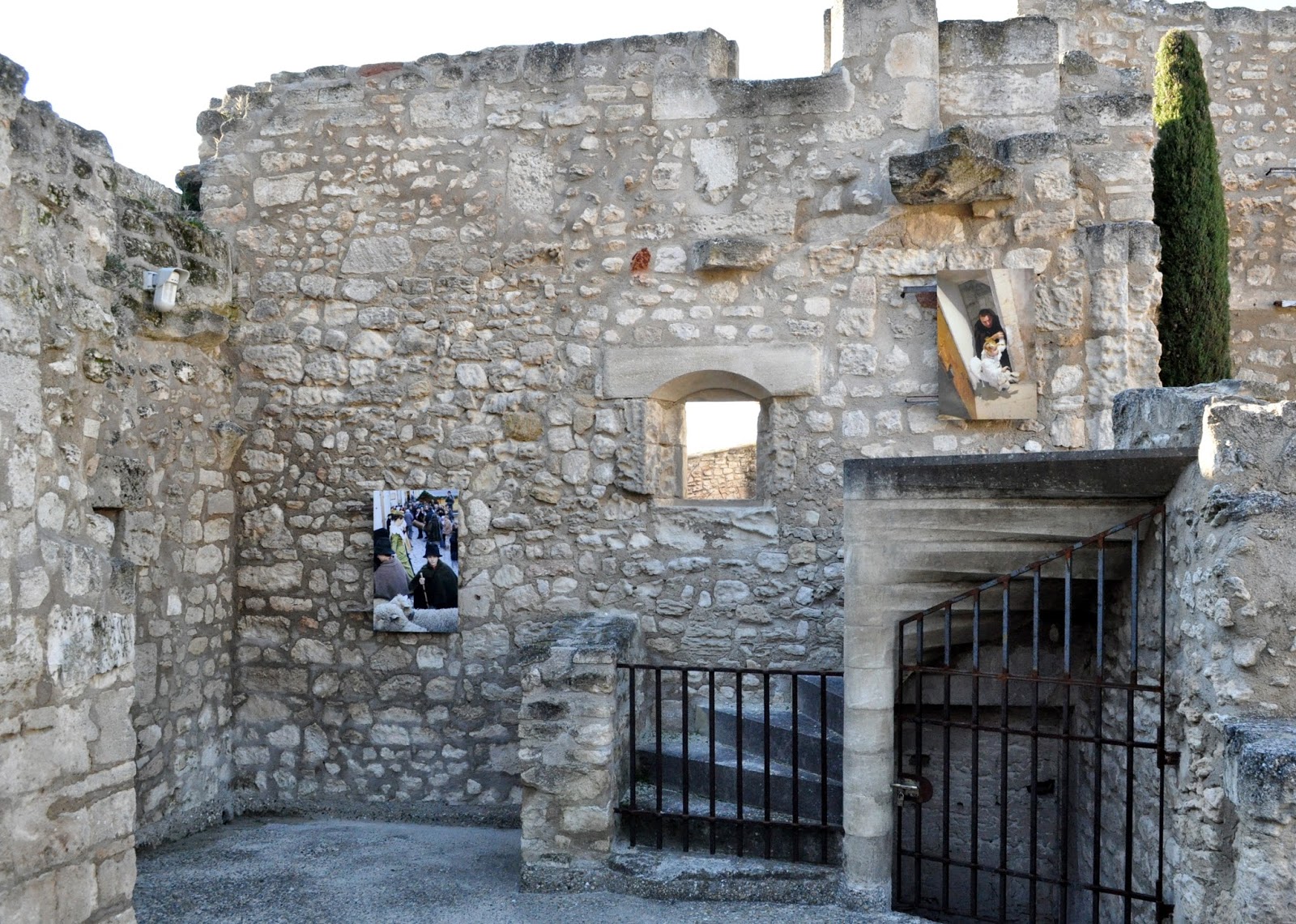 If you go to visit Les Baux de Provence, as with all cobbled hilltop villages, we recommend you wear flat shoes. Athletic shoes would be better than sandals for a visit to the fortress area, which includes some slippery rocks and steep steps and is partly covered with gravel. Les Baux de Provence is challenging for disabled visitors and parts of it would be difficult for families with toddlers and strollers.

The plateau where the fortress is situated can be very windy and cold as it is exposed to the Mistral wind when it blows. So be prepared, you might want to carry a light jacket with you.