A Visit to the Truffle Market in Richerenches, Headquarters of the Knights Templars

Almost as soon as we opened Bistro Des Copains, we started planning a trip to Provence so we could experience the food, wine and culture with chef Melissa. As we got close to January and our trip which would happen while the restaurant was closed for winter holiday, I put together a daily schedule of visits to wineries, villages and markets including the Friday truffle market in Carpentras.

We went to Carpentras on the scheduled day, it was bitter cold, the Mistral and all, but we didn't see or even get a whiff of truffle. Despite truffles being relatively plentiful in this part of Provence between November and March, the only truffles I've seen since were two or three small nuggets at the Vaison-la-Romaine market, mostly because we are usually not in Provence during truffle season.

So when we returned to Sablet at the end of February, I decided that we would go to the truffle market in Richerenches the first Saturday we were there. Richerenches is a small walled village, about 26 km from Sablet, once the Commanderie des Templiers (the fortified headquarters of the Knights Templars).


Besides the famous truffle market that occurs every Saturday morning from November through March, there is also a small market at the same time on the main street aptly called Avenue de la Rabasse (Rabasse is the Provencal word for truffle) where vendors sell cheese, fruits and vegetables, charcuterie, nougat, truffle paraphernalia, wine and other local products.


One of the vendors seen below, sells the nicest dried Cèpes, or Porcini mushrooms as they are known in the US, that I have ever seen. If you have bought dried mushrooms, you know pretty mushrooms are placed in the clear bags so you think the bag is full of similar mushrooms when in fact there are mostly small mushrooms or pieces of mushrooms in the bag.

These Cèpes were not cheap, but they were 100% big, beautiful, white colored Porcini mushrooms, that I cooked into a delicious risotto, but that is a story for a future post.

For those who want their own truffières for hunting truffles, there are vendors at the Richerenches market such as the one seen below who sell oak saplings inoculated with truffle spores.


In the 12th century, Richerenches was one of the most important Commanderies des Templiers in Provence. Today, the walls are mostly delineated by houses around the periphery, the 4 towers at the corners, and some of the Templiers' buildings inside the walls.


After slowly walking down main street to check out what vendors were selling, we entered into the historic part of the village to see the buildings and ruins that remain from the time when Richerenches was a Commanderies des Templiers. The clock tower and iron belfry seen below were built between 1746 and 1747.


The Commanderies des Templiers of Richerenches was founded in 1136 by brother Templier Arnaud de Bedos, who was charged with searching Provence for land and recruits. The Richerenches area was given to him by Hugues de Bolboton who in 1139 became commander of the Knights' Templar.

Near the entrance of the village church is a list of the "heros" of Richerenches. The 12th century stone shown below is engraved with the name of Hugues de Bolboton and dated 1136. 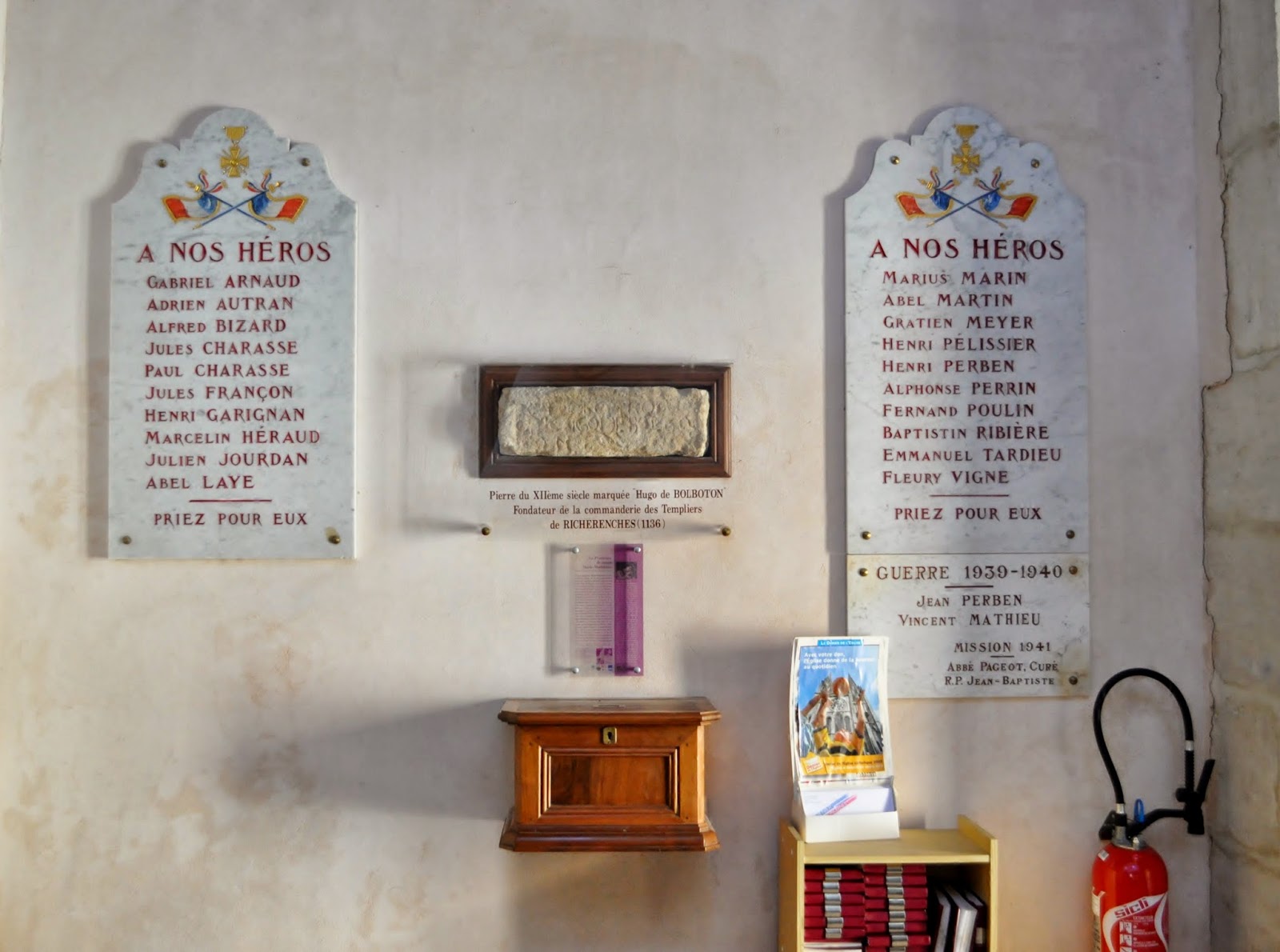 Near the village church, you will find the stone Templars' well.

The Templars' House has been restored and houses the Tourist Information Office where there is a permanent exhibition about the Templars.


As I said, we came to Richerenches for the Saturday morning truffle market. In case you don't know, truffles are a fungus, closely related to mushrooms, the fruiting body of an underground fungus that form symbiotic relationships with the roots of several types of trees, mainly oak and hazelnut.

Truffles look like wrinkled black nuggets, generally the size of a walnut shell, although they can be as small as a pea and as large as an apple or orange. A mature truffle is firm, has wart-like bumps and is a black color. The flesh is black with distinctive white veins.

Climatic conditions are very important for growth of truffles. They thrive on a rainy autumn and grow near the roots of trees, 4 to 12 inches underground in stony, porous limestone-rich soil. They grow best geographically between the 40th and 47th parallels, Richerenches is at the 44th.

While pigs were traditionally used to sniff out truffles, dogs have become more common. There are two reasons: Pigs root to live, not to help their owners, and they often eat the truffle before the master can pry it loose. Also since poaching is common, if you put a pig in the back seat of your car, it might attract attention, but a dog will hardly be noticed.


Supposedly 80 percent of French black truffles come from Provence and the rest from southwest France. On some weekends, more than 1 metric ton of black truffles change hands at the market in Richerenches. The selling of truffles is shrouded in great secrecy, out of open car trunks, from pillow cases full of truffles, precisely weighed on a scale and always paid for in cash.

We got to Richerenches at the beginning of the market which takes place on Cours du Mistral when there were more truffle sellers than buyers. I came armed with advice about how to avoid getting ripped off or pay more than the going rate which I was told should be about 450€ per kg.


An hour later, there were lots of buyers, brokers, sellers and curious onlookers milling about and checking out the truffles for sale that day.

A group of gendarmes made periodic passes down Cours du Mistral and around Richerenches to make sure no one tried to get their hands on all of the cash trading hands. Can someone please tell me why you never see French gendarmes or policeman by themselves? It seems they always work in groups of 2 or more. It would make more sense for them to spread out. But I digress.


After we bought our truffles, we retired to the café near the town hall for drinks along with the rest of the crowd. The café is run by the red head from Australia seen in the picture below and her French boyfriend. Shirley nicknamed her Goldie. She informed Shirley that she doesn't like truffles.


I assume these guys are either sellers, buyers or brokers as their conversation was all about truffles.


It was our lucky day! In addition to the truffle market, there was a special omelet lunch in the Salle des Fêtes 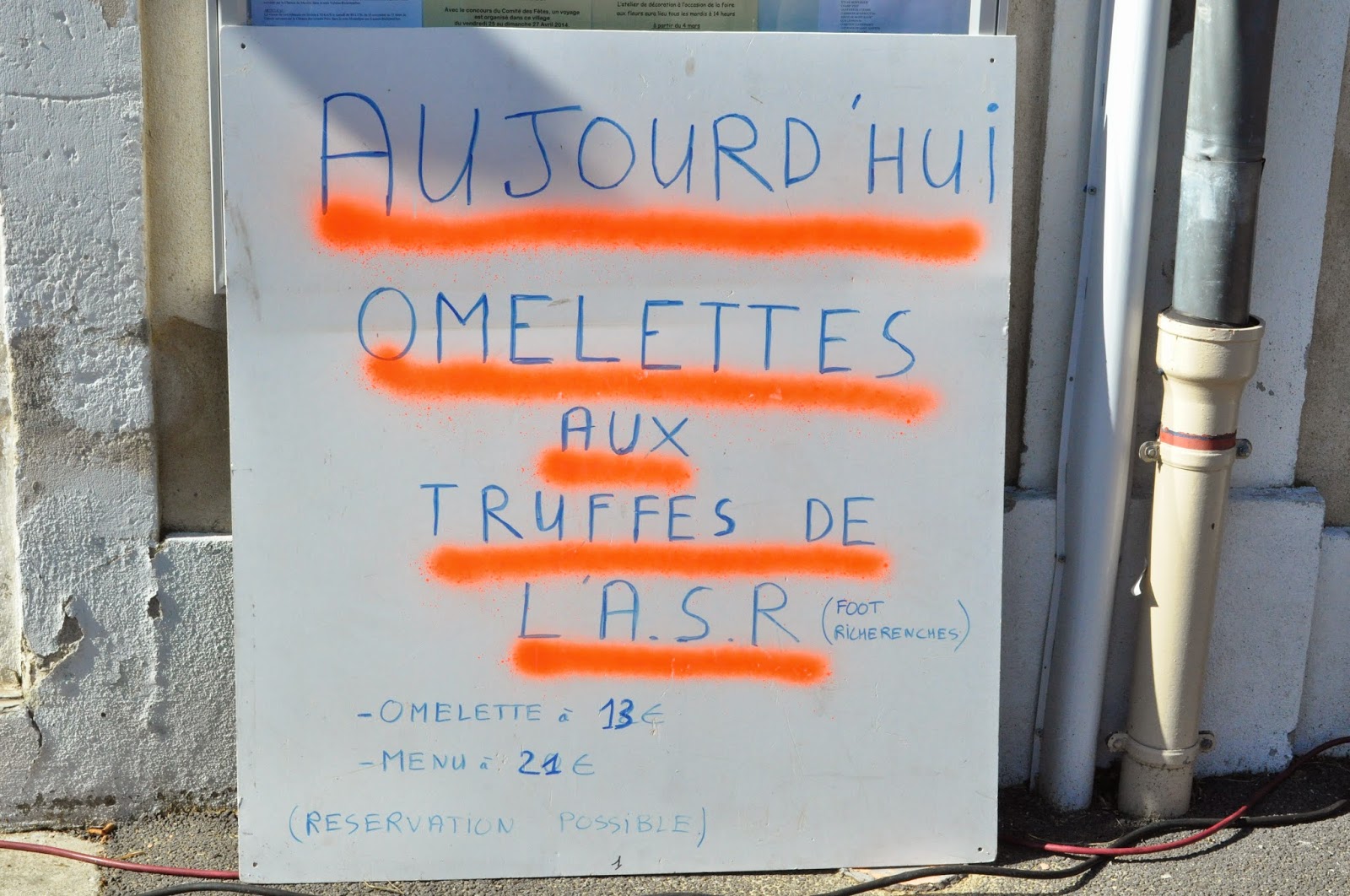 For 21 euros per person, you can eat a tasty truffle omelet, salad, wine, cheese, apple tart, and coffee.

Each serving has been pre-measured to include 10 grams of truffles and 3 eggs per omelet. 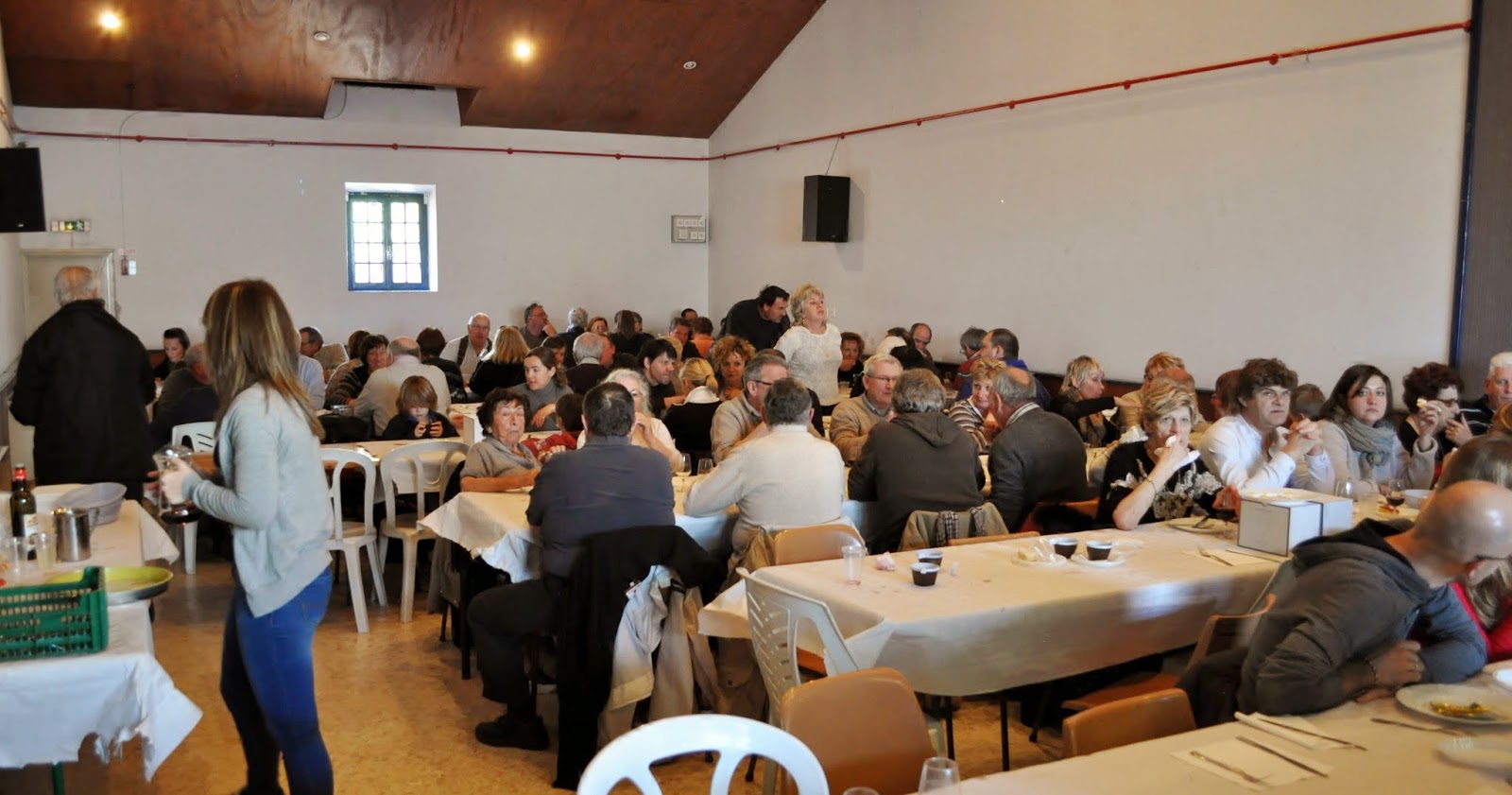 As we left Richerenches after our tasty omelet lunch, the car filled with the aroma of truffles, we passed the Notre Dame de Bon Rencontre chapel seen below.


Below you can see the plate of truffles I bought at the market. If you have not smelled a fresh black truffle, not truffle oil, which in most cases doesn't contain any truffles at all, you can't imagine the strong aroma that fills your refrigerator and spills out into your kitchen when you open the refrigerator door. Just remember, the aroma is strong enough for pigs and dogs to pick up the scent.


For dinner that night, our main course was a simple risotto with lots of truffle shavings. It was absolutely delicious.


I am glad we went to the market and were able to buy such beautiful fresh black truffles. I had hesitated a little about going because I wasn't sure how it worked and I was frankly afraid I would get taken advantage of for being from the United States. I got very nice truffles and for less than what I was told was the going price so I think I did OK.

Thanks for sticking with me to the end of this lengthy post. Have a great weekend. Chat soon.
Posted by Michel at 4:16 PM 12 comments: