We drive past the outskirts of Nîmes often; generally we are headed to Montpellier to visit cousins Jean Marc and Christine, or towards the Metairie Neuve, the family farm in the Tarn or returning home to Sablet on the A 9 autoroute.

My cousin Gerard and his wife Louisette live on the northern outskirts of Nîmes in a town called Marguerittes and we have bought beautiful pottery from Poterie d'Aigues-Vives in a village of the same name to the south, but we have never exited the freeway to visit Nîmes.

That is we had never visited Nîmes until our friend Adam came to visit us in Sablet. One of the places he wanted to visit after reading Rick Steve's infamous blue guide book about Provence was Nîmes. So off we went on a gray overcast day.

Nîmes is about one hour's drive southwest from Sablet off the A 9 autoroute, also known as the La Languedocienne Highway. We didn't exactly know where to go but figured that if we followed the signs for the Arènes - the Roman amphitheater, we would be close to where we wanted to be.

This well preserved amphitheater is a twin to the one in Arles and probably dates from the late 1st century or early 2nd century. It is considered to be the best preserved Roman amphitheater in France. 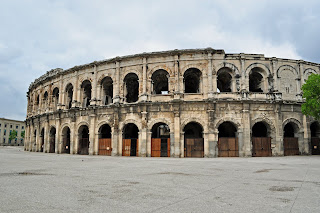 From the outside of the amphitheater, you see two stories. Under the amphitheater, there are two vast subterranean galleries which served as a back stage. If you enter and climb the steps to the top, you have great views out over Nîmes. 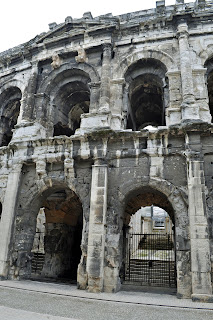 There was seating for 24,000 spectators. In addition to multi-day bull fighting festivals, two have been announced for 2010, the amphitheater also hosts rock and pop concerts, fairs and conventions. 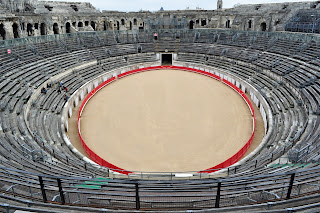 I love the juxtaposition of the old amphitheater and the new Nîmes. This is one of my favorite pictures. 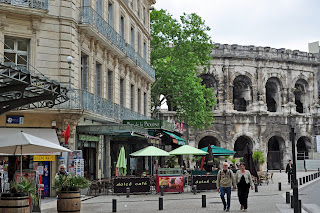 From the amphitheater, we started to stroll toward the Maison Carrée, the temple known as the Square House. Unfortunately for us, there is some restoration work going on, so we couldn't get a real good look at it. It is said to be the best preserved of the Roman temples still standing. 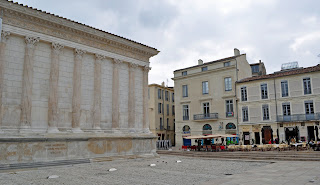 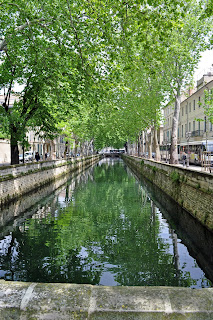 Typical of so many towns and villages of the South of France, we encountered several groups of older men playing pétanque as we entered the Jardin de la Fontaine.

If you don't know, you play Pétanque by standing with feet together in a small circle, to throw metal balls as close as possible to a small wooden ball called a cochonnet (literally "piglet"). 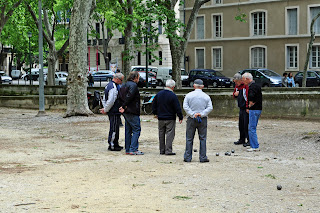 This garden was created during the 18th century. Spring water was collected in a mirror-like pool surrounded by walks before flowing through pools to the canal. 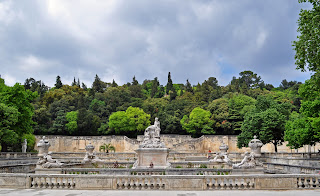 During antiquity, this district included the spring, a theater, temple and baths. 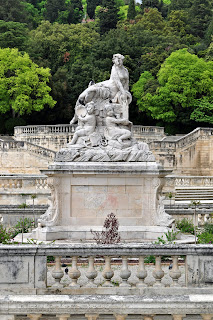 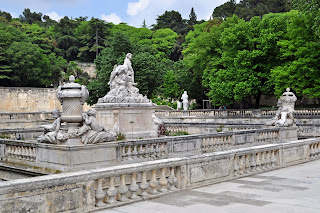 Me with a statue of Bacchus, the Greek god of wine and intoxication in the Jardin de la Fontaine. 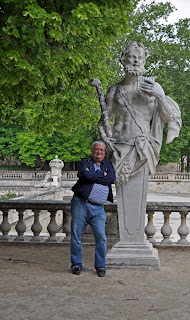 The Temple of Diana dates from the first half of the 2nd century. Its true function is unknown but was probably part of a larger development. 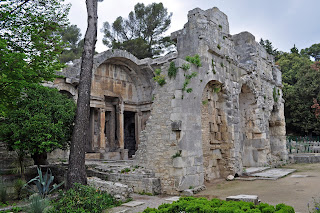 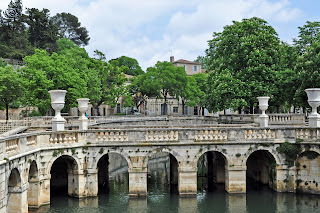 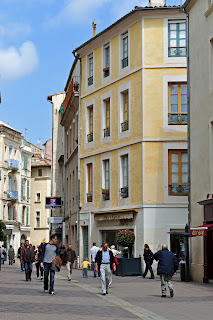 The Cathédrale Notre-Dame-et-Saint-Castor of Nîmes. 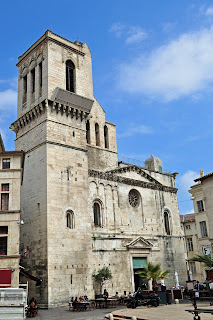 The interior of the cathedral. 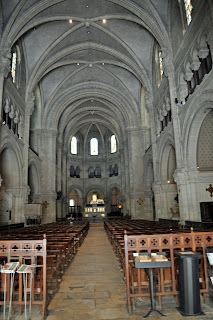 The emblem of Nîmes, a crocodile tied to a palm tree, is a reminder that Nîmes was thought to have been a favorite retirement home for the Roman officers who conquered Egypt. The crocodile is Egypt and the palm tree symbolizes victory. All over town, little bronze crocodile-palm tree medallions shine on the sidewalks. 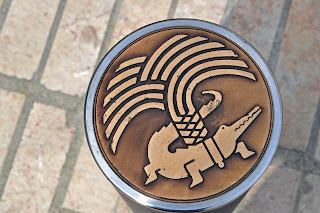 We had a nice lunch which I will write about in a future post.
Posted by Michel at 2:12 PM