Return to the Pont du Gard

I have not kept track of how many days we have lived in France since we bought our home but I am certain we have never stayed in the house or in the village of Sablet for the whole day. We are always on the go.

I confess we don't go to many museums or at least not where you buy a ticket and wander through a building admiring paintings on the wall or other artwork. I am sure we have missed out on some amazing art and culture but its just not our thing.

As regular readers of Our House in Provence blog know, we love going to the markets, walking through quaint villages, tasting wine, seeing fields of lavender and sunflowers and visiting the Roman and Medieval ruins near Sablet.

Our favorite Roman ruin in the South of France is the Pont du Gard, the aqueduct bridge located in the Gard Department of Languedoc-Roussillon about 60 km (37 miles) from our home in Sablet, between Remoulins and Uzès.

The Pont du Gard is part of the 50 km (31 mile) Nîmes aqueduct constructed by the Romans in the 1st century between 41 and 54 AD to bring water from a spring near Uzès, the Fontaine d'Eure, to the Roman city of Nîmes where it was distributed to fountains, baths and private homes around the city.

On our most recent visit with wife Shirley and niece Leslie, we parked in the lot on the Rive Droite - Right Bank, there is a small charge for parking but access to the bridge is free, and strolled along the path until the Pont du Gard came into view. 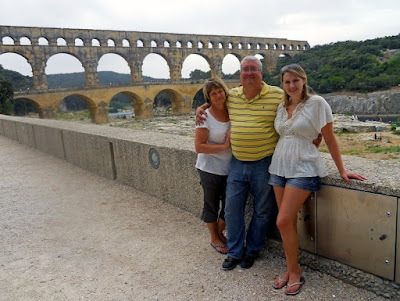 The 900 foot long Pont du Gard has three levels of arches: six crossing the Gard River, 11 in the middle tier and 35 smaller arches which support the water channel. The Pont du Gard is 161 feet high above the river.

You can walk across the bottom tier which has been used as a thoroughfare for centuries - in 1285 the bishop of Uzès ordered that a toll be collected from all travelers crossing the bridge.


The Pont du Gard was built of limestone from a nearby quarry and assembled largely without mortar or clamps. The stones, some of which weigh up to 6 tons, were cut to perfectly fit together eliminating the need for mortar. The cut stone was lifted into place with a human-powered treadmill providing the power for the winch.

Shirley and I always look at the arches and admire the skill it took to design the Pont du Gard without computers and imagine the thankless labor of soldiers, craftsmen and slaves who built the bridge almost 2000 years ago without cranes or other equipment. 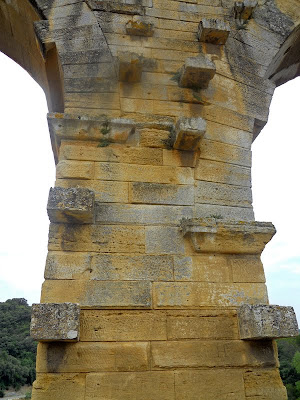 The Aqueduct of Nîmes had a capacity to carry 35,000 cubic meters of water a day that took nearly 27 hours to flow from the spring to Nîmes. The aqueduct descends in height by only 17 m (56 feet) over its entire 50 km (31 mile) length, an indication of the precision the Roman engineers were able to achieve using rudimentary technology.

The channel at the top of the Pont du Gard that carried water across the Gard River.


Bringing water from the spring near Uzès to Nîmes was easier said than done. Although the distance between the spring and the city is only 20 km (12 miles) in a straight line, the Romans had to build the aqueduct 50 km (31 miles) to cross or circle the natural obstacles of the countryside.

The northern exit of the Pont du Gard - Roman conduit for carrying water. 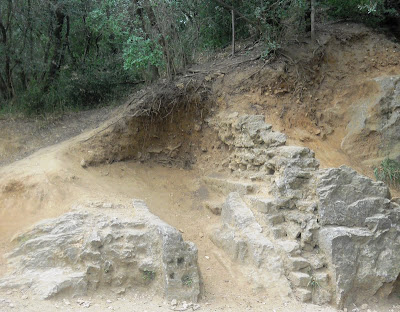 The view from the Pont du Gard north over the Gard River.


The view from the Pont du Gard south over the Gard River.


Make sure to go see the ancient olive tree on the Rive Gauche - Left Bank on the path to the Pont du Gard from the Visitor Center. The sign by the tree says it was born in 908 and lived in Spain till 1985 when the Counsel General of the Gard adopted the tree and planted it here in 1988. 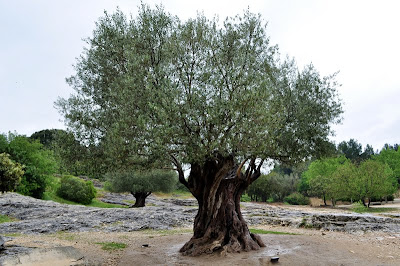 As you leave the Pont du Gard area to return to the A-9 toll road, you will drive down a road lined with beautifully manicured plane trees which create the impression of a grand boulevard. Provence plane trees are a hybrid of the American sycamore tree.

It is said that Napoleon planted plane trees throughout Southern France to keep his marching army cool under the green canopies of the plane trees. 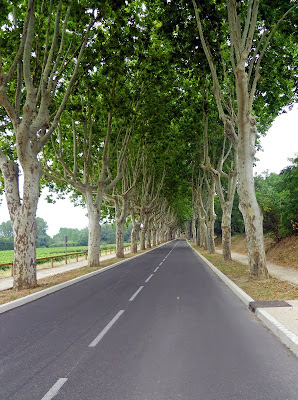 I wonder what the Romans would think if they knew their aqueduct bridge would be preserved in such good condition for 2000 years. The Pont du Gard was added to UNESCO's list of World Heritage Sites in 1985.