We, cousin Jean Marc and his son Matthias and I were driving to La Métairie Neuve, the small family farm near Viane in the Tarn to say bonjour to the aunts and uncles and meet the insurance experts coming to report their findings about Tonton René's burnt out house.

It was a pretty day and our road took us within sight of the Millau Viaduct, the tallest bridge in the world. As Matthias sped down D999 toward Saint-Rome-de-Cernon where we turn and go toward Roquefort-sur-Soulzon where blue cheese is created in local caves, I spotted a large field of coquelicots off to the right.

Now the family was waiting for us to eat lunch at La Métairie Neuve so we couldn't stop. However, I was hoping that during my sojourn in the South of France, I would see purple lavender fields, sunflowers in bloom and if possible, it was late June, coquelicots (red poppies), Shirley's favorite.

We arrived and after la bise with the aunts and uncles, we sat down for a family lunch. As the day passed, I kept thinking that every time we go to La Métairie Neuve, the family is waiting for us and we are either in a hurry to get there or we are in a hurry to get home to Sablet so we have never visited Roquefort-sur-Soulzon.

I figured that even though we were going back to Clapiers that evening, I was at least 90 minutes closer to Roquefort-sur-Soulzon from Clapiers than I would be if we made a special trip from our house in Sablet. So I decided I would head back up the next day to Roquefort and visit a cheese maker.

While I was on the way, I would try to get close to that field of coquelicots I had seen in the morning near Saint-Rome-de-Cernon. The next morning as I got close, I slowed the car and soon spotted a sign on the side of the road pointing the way to Mélac and a Château de Mélac and that big field of red coquelicots. 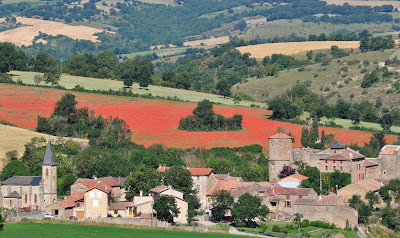 I turned and drove down the narrow road into Mélac, a small hameau (hamlet) with a church, a handful of stone houses, several sheep farms, a fountain and the aforementioned Château de Mélac. 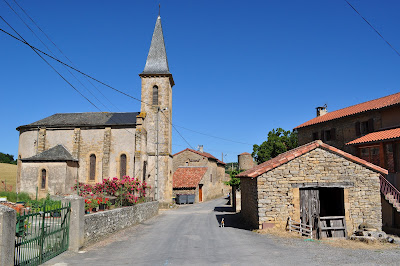 Château de Mélac was built by the Gozon family between the 14th and 16th century. At the time it was built, there were four towers which connected four buildings with an interior courtyard. The Château is now privately owned but is open to the public for tours during July and August. 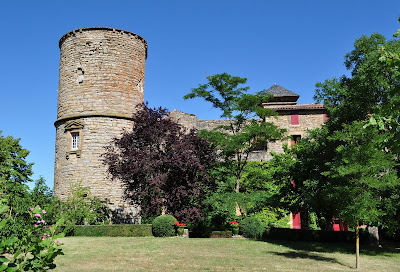 Another view of Mélac with the Butte de Sargels in the background. 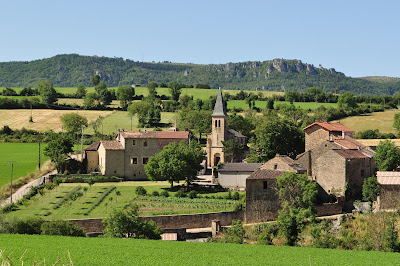 The field of coquelicots in the distance; I still had not figured out how to get closer. 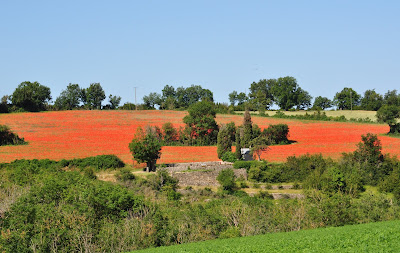 More coquelicots. These coquelicots are so thick you might think they had been planted as a crop. But the only poppy grown as a field crop is the opium poppy. Coquelicots are annuals that form a long-lived soil seed bank that can germinate when the soil is disturbed. 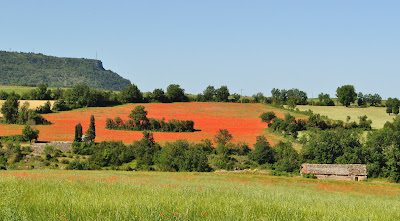 The coquelicot flower is large and showy with four petals that are vivid red with a black spot at the center. Coquelicots inspired impressionist painters including Claude Monet who painted "Les Coquelicots" or "Poppies Blooming" in 1873 and remain a favorite subject of painters today. 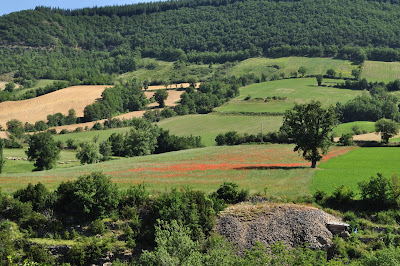 I finally asked a sheep farmer how to get close to that field of coquelicots which looked like a red carpet close up. Due to the extent of ground disturbance during World War I, coquelicots bloomed between the trench lines and no man's land on the Western front.

"In Flanders Fields," a poem written during World War I by Canadian physician and Lieutenant Colonel John McCrae, he referenced the poppies that grew over the graves of fallen soldiers resulting in poppies becoming one of the world's most recognized memorial symbols for soldiers who have died in conflict.

In Flanders fields the poppies blow
Between the crosses, row on row,
That mark our place; and in the sky
The larks, still bravely singing, fly
Scarce heard amid the guns below.

We are the Dead. Short days ago
We lived, felt dawn, saw sunset glow,
Loved and were loved, and now we lie,
In Flanders fields.

Take up our quarrel with the foe:
To you from failing hands we throw
The torch; be yours to hold it high.
If ye break faith with us who die
We shall not sleep, though poppies grow
In Flanders fields. 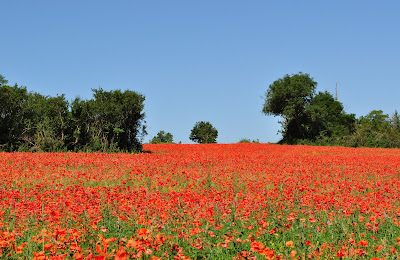 After admiring and taking pictures of the field of coquelicots, I headed back to my car and saw this pretty view of Château de Mélac through the trees. 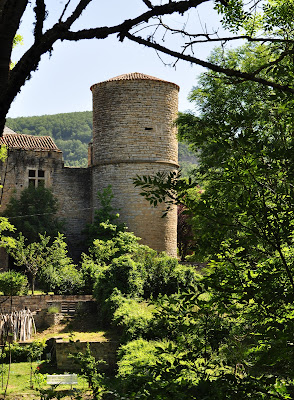