One of my favorite French traditions is the aperitif. For the uninformed, aperitif is both a beverage and a social occasion, and a wonderful part of daily life in France. It is a national custom where time is set aside at the end of the day to share a drink and maybe a bite or two with family, friends, and colleagues, all the while engaged in conversation.

At home, seated around the kitchen table or in the living room, outdoors on terraces or balconies, family and friends come together to share an aperitif and conversation before dinner. At cafés, bars and restaurants, the same ritual takes place. In twos or threes, and in groups, people meet for an aperitif and conversation. It is a ritual where family, friends, and colleagues make the transition from the work day to the personal.

The French understand that to be invited to one's home or to invite someone to your house for an aperitif, is an invitation for thirty minutes to one hour or a little more for conversation, drinks, and some nibbles, generally salty. After the accepted interval has gone by, guests excuse themselves. An invitation to aperitif does not imply that a meal will follow or that one should anticipate enough hors d'oeuvres to make a meal.

In a restaurant, where you are going to have a meal, the aperitif or apéro for short, may be taken at the table. Whether the table is covered with starched white linen or sheet of paper, the first thing the server will say is: "Désirez-vous un apéritif?" (Do you want an aperitif?). When it arrives, it will likely be accompanied by a small plate of olives, nuts, or tapenade or something special prepared by the chef.

The traditional aperitif drinks can be roughly divided into three groups. The wine group includes still and sparkling wines, fortified wines and wine based mixtures. A second group consists of herb and spiced-based alcohols, pastis and Compari, for example, that are usually diluted with water. The third is fruit based and may or may not contain alcohol.

An aperitif by definition (It's a French word derived from the Latin verb aperire, which means “to open.”) is a prelude to dinner, so the "bites" of food that accompany drinks should be tantalizers to the taste buds, preparing them for the meal to come. Generally, the accompaniments are bite-sized finger foods that can be eaten with your hands.

Salty foods are popular - olives, nuts, cornichons and radishes with butter and salt. Spreads made from olives, eggplants, pâté or salt cod and served on toasts or in puff pastry are common. We have also been served saucisson (dry sausages), apero-sized goat cheese marinated in herb-infused olive oil, and tiny clams, known as tellines which are eaten one by one - finger licking good.

Here are pictures of "bites" we served with drinks for friends who came for aperitif at our house in Provence and in Northern California. The first is Sablet, when the weather was chilly and we set up in our cozy seating area in front of the fireplace. We served clusters of cherry tomatoes, two kinds of olives, eggplant caviar (I have shared this recipe before here), and white bean brandade with slices of toasted baguettes. 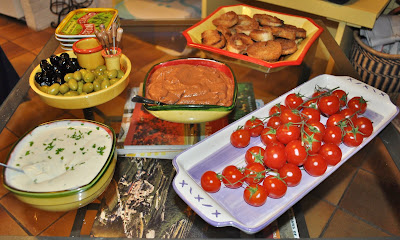 This gathering was also in Sablet but out on the kitchen terrace on a beautiful warm evening in Provence. We served eggplant caviar with slices of toasted baguettes, radishes with Camargue sea salt, two kinds of olives, saucisson, and goat cheese-stuffed cherry tomatoes. We also offered rosé wine from Tavel, white wine from Cassis, pastis and on this occasion, although not typically offered, vodka for one of our guests who we knew likes a cocktail for aperitif. 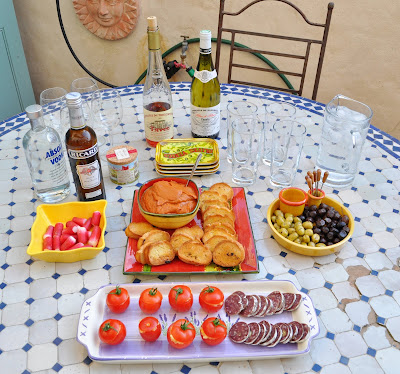 This gathering was in Northern California where we set up on a counter in the kitchen because everyone hangs out there when they are at the house. We served a mixture of marinated olives, radishes, cornichons, bibeleskaes (a fromage blanc recipe from Alsace we got from L'Auberge Chez Francois, a favorite restaurant outside Washington DC), and eggplant tapenade with a variety of crackers. 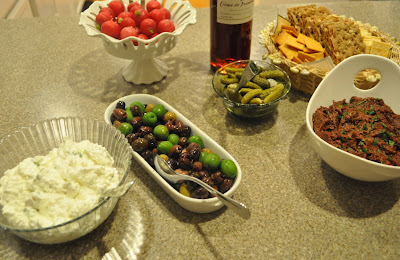 As I told you here, my 2013 cooking challenge is to try 52 new recipes out of different cookbooks. So although we love the eggplant caviar recipe we got from our friend Bruce in Villedieu, I decided to make an eggplant tapenade from "The Bistros, Brasseries and Wine Bars of Paris" cookbook by Daniel Young.

This recipe comes from Juveniles, a wine bar in Paris 1st arrondisement where they serve this tasty tapenade as their house dip. This is very good to serve with toasted baguette slices or crackers with aperitif. 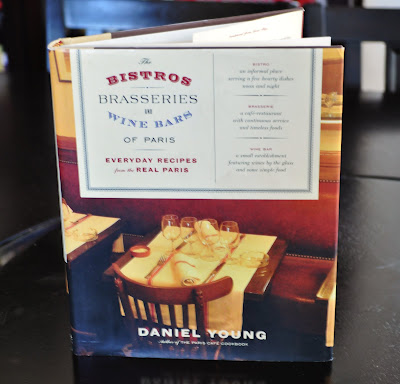 1. Pre-heat oven to 375F (190C). Split the eggplant in two vertically. Brush both halves with the olive oil and score the eggplant with a sharp knife. Place on a baking sheet and roast in oven until golden in color and soft, 40 to 50 minutes.

2. Scoop out the roasted eggplant into a food processor, add the sun-dried tomatoes, black olives, capers, 1/3 cup olive oil, piment d'Espelette, and a few grinds of black pepper. Puree to a paste, about 30 seconds. Taste the puree and correct for seasoning. 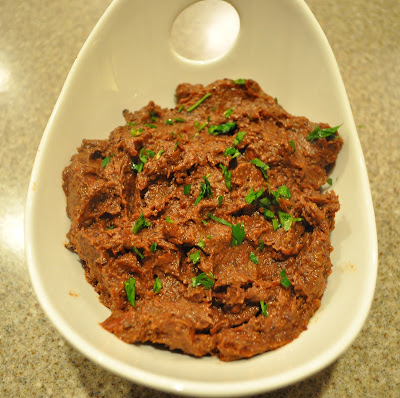 In the words of one of my favorite television chefs Jacques Pepin, "I wish you happy cooking." Bonne journée mes amis et à bientôt.
Posted by Michel at 5:52 PM