It was October and we were back in Sablet with friends Steve and Mary from Michigan. One of our morning rituals is to sit around the kitchen table drinking petit cafes and reading our ipods and English language papers. Invariably the question is asked, usually by Mary, "Michel, what's the plan for the day"?

I had been told by several guests that there is an excellent restaurant in the Luberon village of Ansouis. I knew that Steve and Mary had not been to Ansouis so one morning when the question was asked, I decided that was where we were going to that day. Breakfast over, we headed out the door.

Ansouis is a very pretty old village, perched on a low hill with a restored chateau. The village is located 1 1/2 hours southeast of Sablet (north of the Durance river and south of the Luberon mountains).

Ansouis is classified as one of the Plus Beaux (most beautiful) Villages of France, one of 151 villages in France with this designation. There is a an extensive evaluation process to become a Plus Beaux Villages de France with two initial requirements which must be met:

1. the village has to be rural size and the population can not exceed 2,000 inhabitants;

2. the village has to have at least 2 protected sites or monuments (either listed or registered on the list of historical monuments).

Like other villages in the area, tourism along with agriculture (vineyards and olive groves) play a very important part in the Ansouis economy.


We arrived in Ansouis and found La Closerie Restaurant a short distance from the entrance to the village on Boulevard des Platanes. Being October, déjeûner (lunch) was being served in a very pretty dining room. I assume there is a terrace for dining alfresco when weather permits, but we didn't see it.


The restaurant which is owned by Olivier Alemany, a native of Marseille and his wife Delphine, has been in business for 12 years. The chef offers a variety of 3 course menus starting at 29 Euros for lunch during the week. Our meal started with the amuse bouche seen below.


The food was delicious and beautifully plated and in my opinion worthy of its Michelin star. We pushed ourselves away from the table and headed out to explore the village. 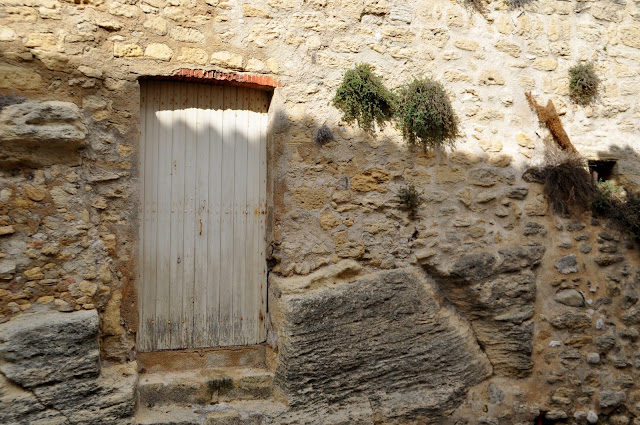 The Community Council of Ansouis held its meetings in the House of the Brotherhood of the Holy Spirit seen below starting in 1540. After the Brotherhood was dissolved, the house became community property and was transformed into the Town Hall and village oven.


An iron campanile was added to the top of the belfry which houses the clock in the late 16th century or early 17th century. The Town Hall was replaced by the former Town Hall sometime between 1793 and 1836. The current Town Hall is located up the street from La Closerie Restaurant.


On the way to the Ansouis castle, you will pass beautifully restored houses, the oldest of which date from the fifteenth and seventeenth centuries.


The opulent Saint Martin Church seen below, is built into the outer wall of the Château. It houses the remains of Ansouis's two saints, Delphine and Elzéar.

The Ansouis castle seen below has been restored and is open to the public. A beautiful staircase leads to ornate rooms with lovely furniture and tapestries. Tours are offered every afternoon except Tuesday. Tours take approximately one hour.

The castle's history goes back to the 10th century, when a military fortress was built on a high spot overlooking the Aigues Valley. There was a dungeon surrounded by a few isolated buildings. This fort belonged to the powerful families of the times - the Forcalquier family, then the Counts of Provence and as of the 1200's, the Sabran family.

The Wars of Religion ended in the late 1500's, and castle-forts began to be transformed into more gracious homes. In the 17th century, the Ansouis castle was renvoated, gardens and terraces were added, and new owners took over. 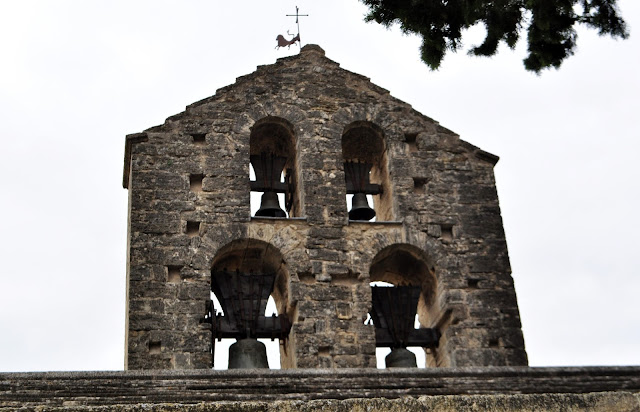 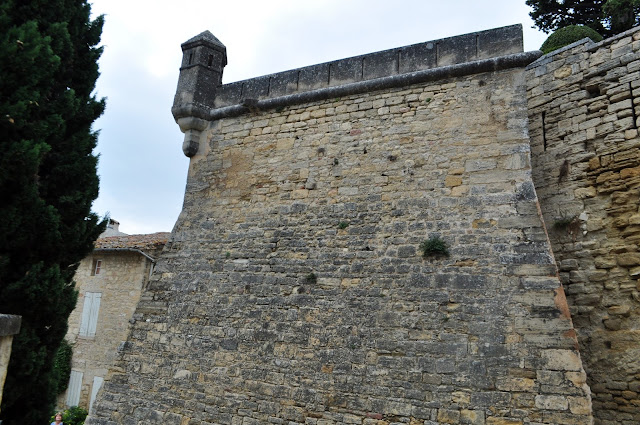 Every day in Provence is a good day. This was a great day; a visit to a beautiful old village, a delicious lunch in a Michelin one star restaurant and a tour of the well restored Ansouis Castle.