Blogs are a wonderful way to make friends with people that you wouldn't otherwise ever meet as all of you who have blogs well know. The best is when you get a chance to meet one of your cyber friends or a reader of your blog in person.

I have had the chance to do this several times including a day last year when we met up with Sherry Long and her husband in Saint-Rémy-de-Provence. Sherry is the author of Dog Trots Globe: To Paris and Provence, which tells the story of Chula, a Sheltie who shares her dog's eye view of France.

If you have not read the book, you should, as it is absolutely charming. You will follow Chula as she sniffs her way around boulangeries, lavender fields, and big outdoor markets of Provence. In Paris, she trots across the Seine, stands on her hind legs in awe of the Eiffel Tower, and attends opening night at a gallery.

As I was saying, last year Sherry and I got to emailing back and forth and discovered that she and her husband live in Northern California and also have a home in Saint-Rémy-de-Provence and we agreed that we would meet for lunch as we were going to be in Provence at the same time. Unfortunately, Chula was not going to be there.

On the appointed day, we headed off to Saint-Rémy, which is about 60 kms south of Sablet, at the foot of the Alpilles Mountains. The birthplace of Nostradamus in 1503, Saint-Rémy is most associated with Vincent Van Gogh, who after cutting off his ear in 1888, committed himself to an asylum there, during which time he painted olive trees, irises and the nearby Alpilles on more than 150 paintings.

We have not spent any time in Saint-Rémy since we were there with some of our Bistro Des Copains employees on a market day in January when an icy cold Mistral was blowing, making it impossible for us to stay outdoors and we retreated to one of the few cafés open that day. Since it was again market day, we went early so we could walk around Saint-Rémy before meeting Sherry and her husband.

The Vielle Ville (old town) is encircled by a ring of plane tree-shaded boulevards. The most visible remains of Saint-Rémy's 14th-century defensive wall are the portes like this Portail Saint-Paul still in use today as the southern entrance into the center of town. 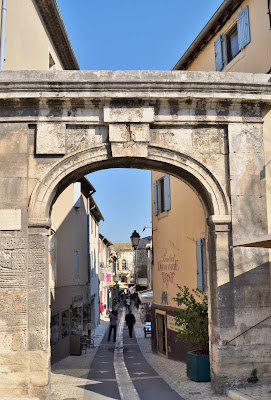 Here are a couple of pictures of what we saw as walked around Saint-Rémy, As I said, it was Wednesday, market day in Saint-Rémy so we walked through the market stalls to see what was offered for sale including this pretty display. 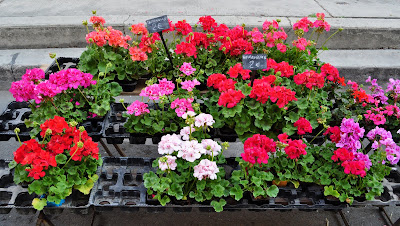 A display of items for sale to tourists. 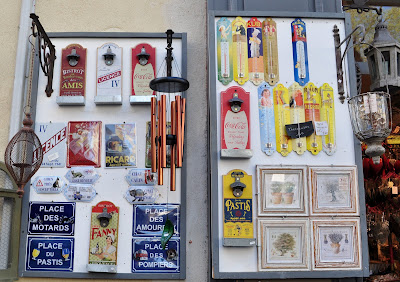 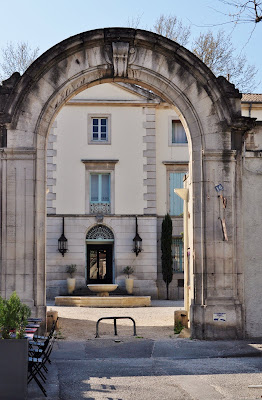 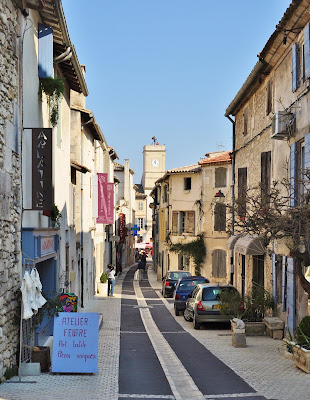 Sherry had made reservations for lunch at Le Bistrot du Paradou, a favorite foodie destination for many years but a place we had not been. So I was most excited about finally going there.

Le Bistrot du Paradou is located about 12 kms southwest of Saint-Rémy in the tiny village of Paradou. 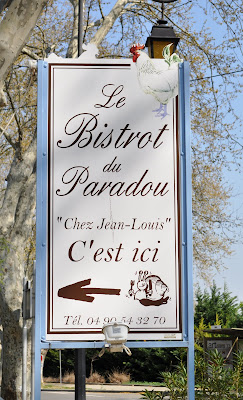 The restaurant is located in a traditional building, shaded by ancient plane trees. Although Mireille and Jean-Louis Pons who ran this lively bistrot for many years are no longer a presence there, the kitchen is still overseen by longtime chef Vincent. 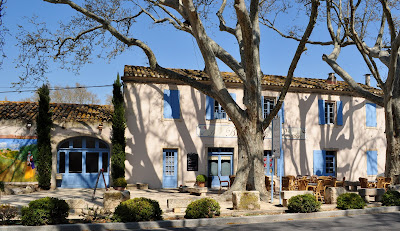 A pretty mural next to the entrance to Le Bistrot du Paradou. 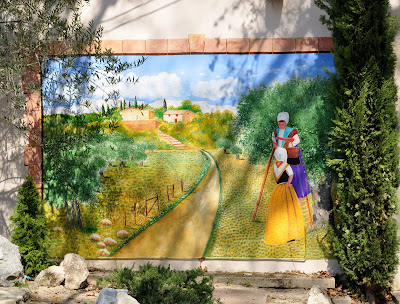 The dining room is country bistro in style: stone walls, wood-beams on the ceiling, zinc-topped tables, a large bar and black and white photos of celebrities on the walls. 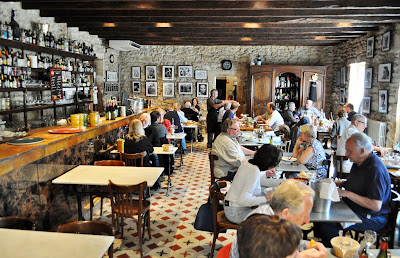 The restaurant offers only a daily set menu that cost €42 at lunch when we were there, higher in the evening, and includes starter, main course, cheese, choice of desserts, wine and coffee.

The menu varies by the season and by the day of the week with choices including tête de veau, lamb, spit roast Bresse chicken, cassoulet and aioli. They don't advertise it but the kitchen usually has options available for diners who have food allergies or dietary preferences. 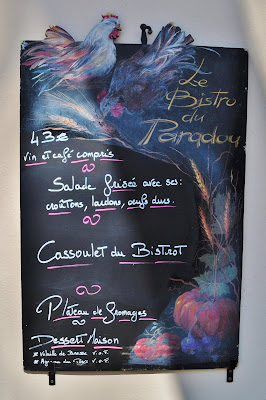 Wine is included with your meal and a bottle of Mont-Redon Côtes du Rhône was set on our table and a second one later when we had finished the last delicious drop. 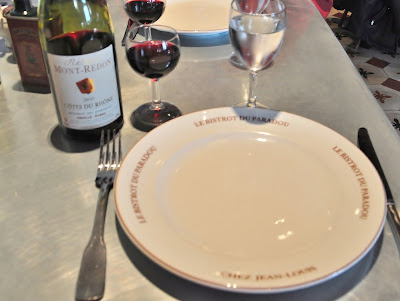 Dishes are served family style. The starter that day was a frisée salad with croutons, lardons and hard boiled eggs with a tasty vinaigrette. 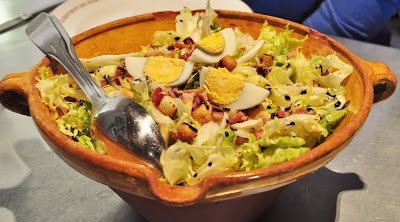 Being Wednesday, the main course offering was cassoulet. A big cassole, a conical earthenware container, glazed inside, the traditional vessel used for making cassoulet, filled to the brim with cassoulet was set in the middle of our table. The aroma which came out of that steaming dish made your mouth water. 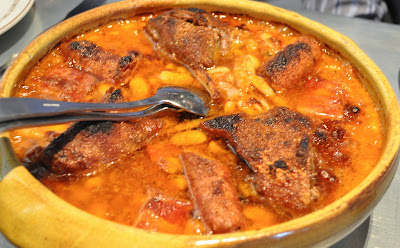 We helped ourselves to plates of white beans, duck confit, meat and sausages in a rich tomato sauce. We all spooned second and third portions of this delicious dish on our plates. 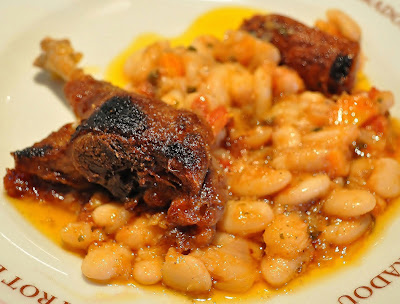 Shirley is mostly vegetarian and the kitchen was happy to accommodate her with this tasty plate of Provençal vegetables. 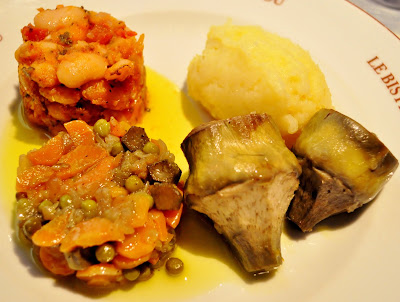 When we exhausted our ability to eat anymore cassoulet, our table was cleared and a wicker platter of cheese was brought to the table for us to serve ourselves as many as we wanted to try. 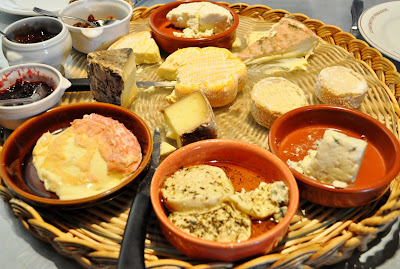 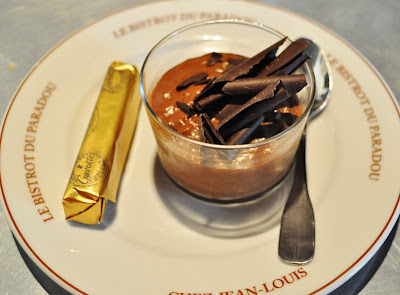 ice cream. We finished with espressos. 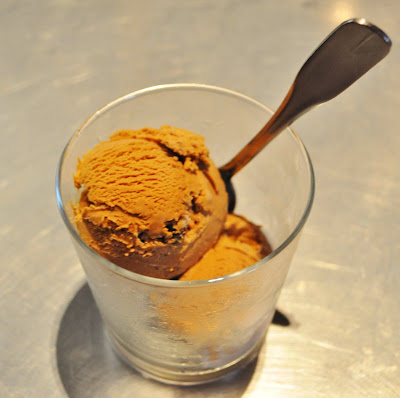 As we headed back to Sablet, we passed this field with sheep. It reminds me that we must be in Provence when a Fête de la Transhumance takes place in Saint-Rémy on Pentecote Monday (50 days after Easter).

By the end of May, when there is little rainfall, the grass can no longer feed the sheep and water becomes scarce, these sheep and thousands more begin their journey towards the high mountain pastures. Today carried by truck, this trip, done by foot in the past, involved more than 10 days of walking.

At the Saint-Rémy Fête de la Transhumance, more than 3000 sheep from the Alpilles as well as goats and donkeys, accompanied by their shepherds in traditional costume along with their sheep dogs, parade twice around the boulevards that ring the old town center. 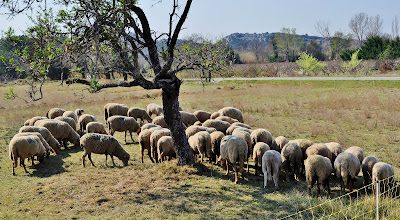 While it's not inexpensive to dine there, I think it's relatively good value given the quality, multiple courses, good wine and friendly service that comes with your meal. Reservations are definitely recommended, especially in high season. You may wish to check to see what will be served that day.